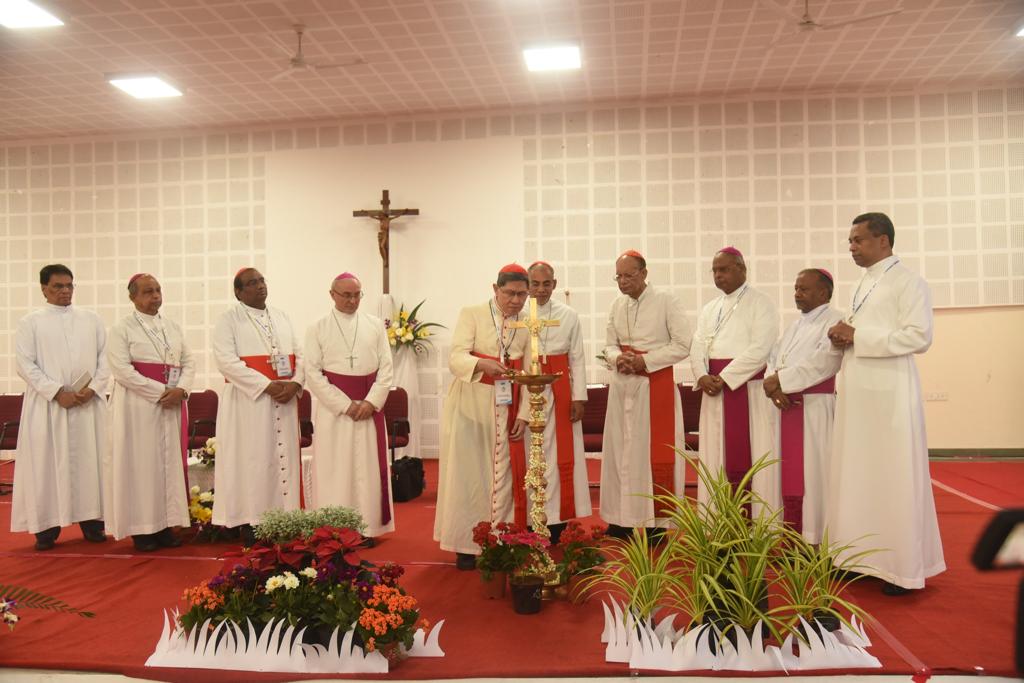 BANGALURU, JAN 25 (CCBI): Inaugurating the 34th Plenary Assembly of the Conference of Catholic Bishops of India (CCBI) of the Latin Church, in Bangalore on Tuesday, 24 January 2023, His Eminence Antonio Luis Cardinal Tagle, the Pro-Prefect of the Dicastery for Evangelization, exhorted the Bishops in India to promote the message of love.

Cardinal Tagle encouraged the Bishops to tell the story of love in order to promote communion and participation in the Church and the society. He reminded that it is the duty of each person to transform our society into a peaceful society through the message of love.

His Eminence Filipe Neri Cardinal Ferrão, the President of the CCBI and the Archbishop of Goa and Daman, presided over the inaugural function. He highlighted the beautiful diversity of India in his presidential address. He said that “Our country is a loom holding diverse threads of religions, spiritualities, cultures, traditions, languages and social strata that blend together to form a complex and beautiful tapestry. Alongside a profound spirituality, social and economic disparities deeply fragment the fabric of this nation.”

The inaugural meeting began with the prayer to the Holy Spirit by chanting the traditional hymn ‘Veni Creator Spiritus’. Then the dignitaries lighted the traditional Indian lamp as a symbolic sign of the beginning of the Assembly, while the choir chanted Shanti Mantra (asato mā sadgamaya – Mantra of Peace).

Most Rev. Peter Machado welcomed the gathering. Archbishop Leopoldo Girelli delivered the benedictory message. The message of His Holiness Pope Francis was read by Archbishop George Antonysamy. The annual report of the CCBI was presented by Most Rev. Anil Couto, Secretary General, CCBI and the Archbishop of Delhi. Rev. Dr. Paul Parathazham, Director of St. John’s, provided some relevant information about the accommodation and other facilities. Rev. Dr. Stephen Alathara, the Deputy Secretary General of the CCBI, proposed the vote of thanks. The inaugural session concluded with the prayer led by His Eminence Anthony Cardinal Poola, Archbishop of Hyderabad.

His Eminence Antonio Cardinal Tagle was felicitated as it was the first time he participated at the Plenary Assembly of the CCBI. Abp. Anil Couto honoured him with a Kashmiri shawl, Abp. George Antonysamy garlanded him with the traditional sandal wood garland, a wooden statute of St. Anthony was given to him by Abp. Leopoldo Girelli and the painting of the Indian saints was gifted to him by Cardinal Filipe Neri Ferrão.

The recently appointed Bishop-Designate Sebastião Mascarenhas, S.F.X., former Superior General of the Missionaries of St. Francis Xavier (Pilar Fathers), was accorded a warm welcome as member of the Conference. Pope Benedict XVI who passed away on 31 December 2022 and Bp. Alphonse Bilung, SVD, Bishop Emeritus of Rourkela Diocese in Odisha who passed away on 11 November 2022 were gratefully remembered. A moment of silence was observed in their memory.

The theme of the Plenary Assembly is “Telling the Story of Jesus in our Context: The Synodal Way.” In the afternoon, in two sessions of the first day His Eminence Luis Antonio Cardinal Tagle addressed the Bishops on the theme.

Late in the evening of the day a cultural evening was organized in honour of Cardinal Tagle. Mount Carmel, Jyoti Nivas, St. John’s Medical College and the musical group of Dr. Maya Mascarenhas put up various cultural items.

The 34th Plenary Assembly will conclude on 30 January 2023 at 1pm. The Conference of Catholic Bishops of India consists of 132 dioceses and 190 Bishops. The CCBI animates the Church in India through its 16 Commissions, 6 Departments and 4 Apostolates. Its main Secretariat is in Bangalore with extensions in Goa, Delhi and Pachmarhi (MP). The Conference of Catholic Bishops of India (CCBI), which is the Canonical National Episcopal Conference, is the largest in Asia and the fourth largest in the world.