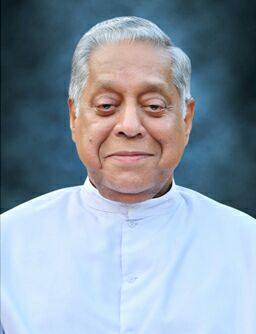 Mogarnard Parish is today in a joyful mood. They are in their toes to celebrate the platinum jubilee of the birthday of their Parish Priest Fr. Mathias Periera.

A grand celebration is organised celebrate this occasion on Sunday, 24 January 2016 at Deva Matha English Mediuum School Grounds. Thousands of people are expected to witness this event. Assistant Parish Prist Fr. Nelson Pais and his team work day and night to make this event a memorable one.

Fr. Mathias Pereira was the last son among eleven children of Late Magdalene and Jacob DSouza of Ramasamudra near Karkala in Miyar Parish. He was born on 20th January 1941. He belonged to a very poor agricultural family.

After matriculation he went to Bombay and started his career. But his urge to serve the downtrodden made him to join capuchins. Capuchins in those days were known to live a very hard and fasting life. So his mother and his sister-in-law forced him to join Mangalore Diocesan seminary. But his inner voice to serve the poor did not get altered. He was ordained priest on 31 December 1970 and worked as an assistant parish priest in Valencia Church for two years.

Within two years of his priesthood service he was given the responsibility of Parish Priest of Pavoor Church. This church is the only church that belongs to tulu speaking dalit Christians in the Mangalore Diocese.

Here Fr. Mathias had ample of opportunities to serve the marginalised. He worked day and night with the dalits to uplift their social and financial status. His vision was to educate them in the right direction so that they can stand along with the other citizens of our nation. He introduced them the Government Schemes. He built them houses.  He provided them the education. His service was not only for Christians but to the dalit of all the religions. That was the most satisfying in my life says Fr. Mathias.

First thing that he did at Paladka was built a boundary to the entire land and started agriculture. He cultivated a very green coconut farm. Visited all the poor families in the parish and settled their conflicts. Worked for their social and financial upliftments. Building the families was his main goal.

As a project of platinum jubilee of Paladka Parish he took up the project of new building of the church school and a church at Saverapura. He became so popular over here that the parishioners never allowed him to move out of this parish. After serving 11 long years he got him to transferred to do missionary work in Bidar. After serving for three years he was appointed as a director of Gurpur Agricultural School for one year

Though Fr. Mathias is completing his 75 years his zeal and enthusiasm to work for the people has not diminished. He has carried out lots of development activities over here. Lots of changes are made to improve the quality of education in St. Antony Hr. Pry. School, St Antony High School and Deva Matha English Medium School School and High School. He also constructed a new building to the school. Celebrated 125 years jubilee of the church was held in a very grand manner.

The parisheners have planned to celebrate the 75th jubilee of Fr. Mathias Pereira in a very grand manner. As Fr. Mathias in his entire life slogged to uplift the poor and rendered his service in educating the people the parishioners have planned to install an education fund to make this celebration a meaningful manner. The Bishop of Mangalore Most Rev. Dr. Aloysius Paul D’Souza will preside over the celebrations.

Wishing Fr. Mathias Pereira a healthy, holy long life so that he may inspire and serve many more.
Fr. Mathias may be contacted on his Mobile: +918197455233 or Email: frmathiaspereira@gmail.com