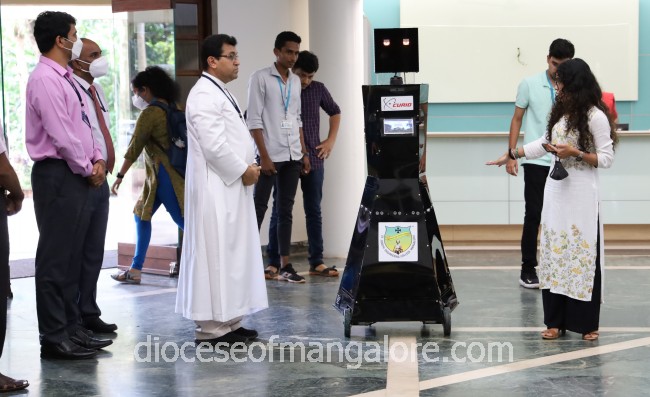 Oct 25, 2021 : Students of the Automation and Robotics Club at St Joseph Engineering College, (SJEC), Mangaluru, recently developed an Auto Navigation Robot called CURIO capable of greeting visitors at the entry to the Administrative Block of the College. The Bot uses the latest technologies such as ROS (Robot Operating System) and LIDAR for its functioning. Multidisciplinary teams worked across two internships, one in March and another in September to achieve this breakthrough.

The primary objective of these internships was to design an automated bot in addition to developing various multidisciplinary skills, real-world problem solving, and communication skills. Members of the internships were put into various teams namely Robot Operating System (ROS), Raspberry Pi, Structural Design, Motor & PID, PCB Design, Embedded System Design, and IoT so that work could be done simultaneously and efficiently.

In the recently concluded Internship (30 August 2021 to 25 September 2021), the Robot Operating System team dealt with integrating LIDAR with ROS, Migrating ROS to Raspberry Pi, establishing communication with Arduino, implementing bot movements on hardware, and creating a virtual environment of the College Quadrangle for the bot. The Raspberry Pi team processed data from the motor team and embedded team, designed and programmed the bot display and eyes, interrupts were successfully sent, audio was set up for the bot using text to speech code and a program was written to receive data from the Robot Operating System.

The PCB design team designed a Motor driver board based on Metal Oxide Field Effect Transistors (MOSFETS), a board to integrate the required sensors, a Mainboard to receive data from all the sensors and feed it to the Arduino Mega and a shield for Arduino Mega and Pi.

The Embedded system and Design team acquired and processed data from the Ultrasonic sensor, IR sensor, MPU 6050 using RTOS, designed a suitable Battery Management System for the bot and implemented PID control for the Motors.

The outcome of the internship was that a Bot was designed to move in a predefined path using basic sensors. The future scope of this bot is implementing Facial Recognition, Virtual Assistant, Design Upgrade, Advanced ROS Application, Implementation of Machine Learning to some degree and much more.

The final bot CURIO was unveiled and demonstrated in the Quadrangle of the Administrative Block in the presence of the Director Rev. Fr Wilfred Prakash D’Souza, Deans and Heads of various departments, and student members. Team-wise assessment and presentations were conducted in which members of each team of various disciplines presented their contributions to the bot. It was then followed by a valedictory ceremony in which participants of the internship were awarded for their work to the final version of the bot.