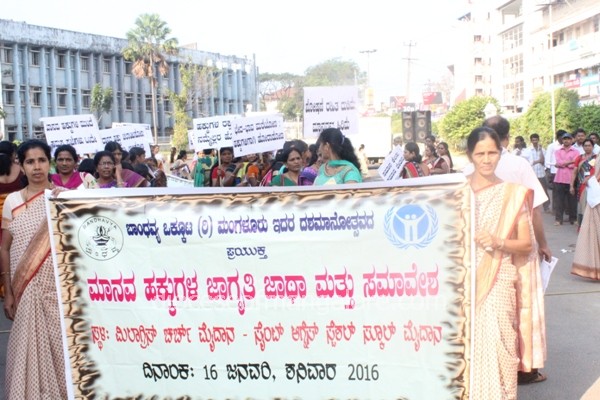 Bandhavya on account of their decennial celebrations organized a Peace Rally and Convention on Human Rights from Milagres Church grounds to St Agnes Special School grounds, Bendur, on 16 January 2016.

The rally was inaugurated by Mrs. Jacintha Alfred, Mayor of Mangaluru City Corporation. 18 NGO’s of Bandhavya federation participated in the rally.

After the rally, the convention was held at St Agnes Special School grounds. Mrs. Lydia Moras and team led the prayer, followed by a street play on human rights by the MSW students of Roshni Nilaya, the School of Social Work.

MLA JR Lobo in his keynote address congratulated Bandhavya for 10 years of social service and said, “If we read history we will see that human rights have been violated from a very long time. Violation of human rights cannot be completely stopped, but can certainly be reduced.” He said that human rights were violated due to many reasons but prominently due to religion and corruption.

Resource person, Mrs. Shailaja Santhosh, Professor of Human Rights Department in School of Social Work Roshni Nilaya, said, “Everyone has the rights to live a dignified life. Human rights are our birth rights and nobody can take them away from us. Of all the rights guaranteed by our constitution, right to life is the most important one”.

She further said that when any right is denied, it is amounts to exploitation of all the other rights. People in general including educated are not aware of the rights the Indian constitution has guaranteed. “The most vulnerable population to human rights exploitation is, women, HIV/leprosy patients, patients suffering from life threatening diseases, children, elders, backward class community and people with mental disorders. In India, about 28% minor girls are married off at early age and face life threatening situations during pregnancy,” Shailaja said and therefore she stressed on education of women but said that women of Dakshina Kannada are well off when compared to the women of other places.

Former Lokayukta, Justice Santhosh Hegde, who was the Chief Guest of the Programme said, Lokayukta had conducted many investigations against corruption which were linked to human rights violations. He said that there were instances where doctor receive huge paychecks and still violate the human rights of the patients by refusing to treat them for not receiving bribe. “Human greed has no medicine. When we show humanness to others, then only we become qualified to be called as humans,” he said.

Bishop of Mangaluru Diocese Dr Aloysius Paul D’Souza said, “I appreciate the work of NGOs that have organized this event. We can be called humans only if we live like one. Today human rights are being violated in the name of religion and religious intolerance is on the increase. People are objecting to what others wear and eat, and similarly, even corruption contributes to violation of human rights. If we are aware of our rights we can be less vulnerable. I pray that God enlightens the minds of those in power so that human rights are not violated.”