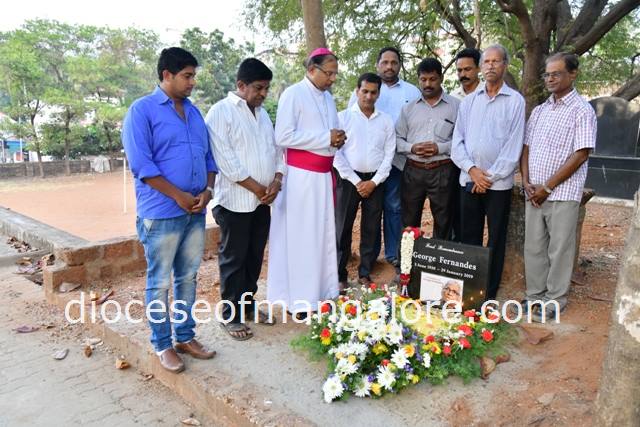 Dr Peter Paul DSouza, Bishop of Mangaluru Diocese who attended the condolence meet said, “George Fernandes was born in Mangaluru, ruled in Delhi and stayed in the hearts Indians . He loved his native and kept close relationship with the people of Mangaluru. He was the true fighter . Being a leader of labourers, he served poor and became their voice . He is the great son of India. He kept open his doors for poor and exploited. Now he will be remembered as a role model.

In his condolence speech, Anantha Asranna , Priest of Kateel temple said ” Now George Fernandes became a saint. His good deeds he did in his life, gave him a holy place in the altar of people’s hearts. He lived simple life and taught to others also. He will be an inspiration to all”.

Remembering George Fernandes, Felix DSouza, Mumbai based labour leader said, “George Fernades loved the language of Tulu and he used it wherever a native met him. Being a simple person he won the hearts of the labourers of Mumbai, Bihar and other parts of the nation. He is the real fighter and genuine politician. Now he is no more with us. But still he leads us by his thoughts.”

Earlier the Bishop, office bearers, members , relatives and followers of late George Fernandes visited the the cemetery where the ash of his mortal remains are buried and conducted prayer service.