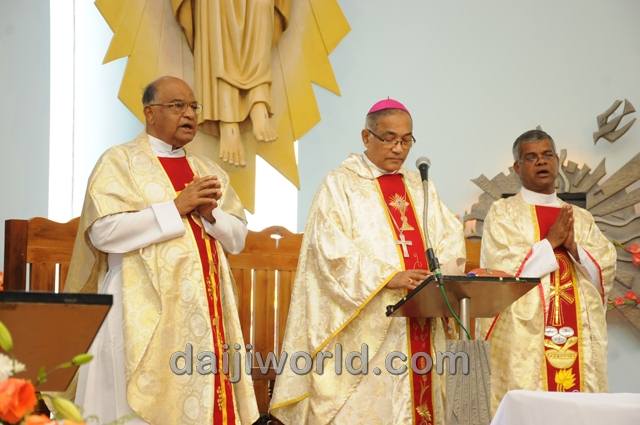 In his homily, the bishop extolled the virtues of Blessed Joseph Vaz and said, “Vaz lived a simple life and looked after the sick and the needy. This is a joyous moment for all the faithful especially of this church, as six years of preparation have finally borne fruit.”

Calling upon the devotees to follow in the example set by the newly-canonized saint, the bishop said, “Joseph Vaz was highly devoted to god and like him, we too should practice our faith sincerely and live for others.”

Later, a stage programme was held in which MP Nalin Kumar Kateel also participated and conveyed his best wishes. Health minister U T Khadar too visited the shrine. On Thursday January 15, Msgr Dennis Moras Prabhu, vicar general of Mangalore diocese will celebrate the solemn festal mas. Dr Bernard Moras, archbishop of Bangalore diocese will celebrate the solemn festal mass at 10.30 am on January 16. Chief minister Siddaramaiah is expected to visit the shrine on January 16.

Joseph Vaz was born on April 21, 1651 in Benaulim, Goa as the third son of Christopher Vaz and Miranda of Goa. He became a priest in 1676 and served in different parishes of Goa till 1681. Later, he was sent to Canara. Fr Joseph Vaz travelled from Goa barefoot. He served in Honnavar, Basrur, Kundapura, Gangoli, Mulky, Mangaluru and Ullal Panir. He was miraculously saved from an attempt on his life in 1684, when he was serving as the parish priest of Panir Church. His ambition was to work as a missionary in Sri Lanka. He entered Sri Lanka in 1687 as a labourer, defying a ban on Catholic priests. He served in various places in Sri Lanka braving all odds, thus rekindling the Christian faith in Sri Lanka.

Fr Joseph Vaz was a courageous soldier of Christ, a dedicated Indian missionary and a humble servant of God. Recognizing his missionary work, Pope John Paul II proclaimed him as blessed Joseph Vaz in Colombo on January 21, 1995. He is venerated as the ‘Apostle of Sri Lanka’ and also the ‘Patron of Goa’.

Mudipu is first church in India dedicated to blessed Joseph Vaz. The Patron of Mudipu Church Blessed Joseph Vaz (to become Saint on January 14) came to this place after having been appointed as the parish priest of Ullal-Panir.

It was a Wednesday like no other for the Archdiocese of Goa and Daman. The pealing of church bells across the State at around 9 am was just a minor manifestation of the enormity of what was occurring. There was no festive lunch on the table or a holiday mood in the air. The celebrations were more spiritual – masses and prayers. It was a moment when the hearts of many Goans skipped a beat as Pope Francis declared Blessed Joseph Vaz a Saint at Colombo.

Parish priest of Porvorim, Fr Tomas Lobo said, “To me, it is a matter of great pride and joy that we are getting our first Goan Saint and that too, from our beloved Pope Francis. His missionary dynamism is truly exceptional and inspirational. God bless our church in the present times with such courageous, dynamic and joyful missionaries.” With the canonization event happening in Sri Lanka, does not reduce its importance. Bl Joseph Vaz is the first Goan to be raised to the altar of the Universal Church and the Goa Archdiocese has been waiting for this for centuries.

“Canonization would project the Patron of our Archdiocese as a saint for the whole Church, with Catholics everywhere invoking him as Saint Joseph Vaz. This remains our dream to this day,” wrote Archbishop Filipe Neri Ferrao in August last year, asking for prayers for the canonization. The prayers were answered and that dream has been fulfilled.

A few hundreds of Goans – clerics and laity – from across the world have travelled to Colombo for the Canonization. Besides Archbishop Ferrao, there are other bishops of Goan origin including Cardinal Oswald Gracias of Bombay, Archbishop Anil Couto of Delhi, Bishop Allwyn Barreto of Sindhudurg, Bishop Theodore Mascarenhas auxiliary bishop of Ranchi and other priests and religions.

Fr Romualdo Robin Rodrigues, parish priest of Candolim who was earlier the Vice-Postulator for the cause is also in Colombo, had said, “This trip to Sri Lanka is a pilgrimage, not a tour. We will live the humble life of Bl Joseph Vaz. We will visit the places, including the place where he landed in Mannar on the beach – tired and exhausted – where he began his ministry after leaving Goa as a coolie.”

Goa finally has an intercessor of its own in heaven, its patron saint who is also its son. Later on Wednesday, after the rite of Canonization was completed, Catholics across the world prayed to St Joseph Vaz and Churches anywhere were dedicated to him. As long as he remained ‘Blessed’ there could be devotion to him only in the dioceses where he lived and worked. From Wednesday, the Universal Church can invoke the Goan Saint’s name in their prayers.

Devotion to the Saint in Goa has increased in the past few years and since the announcement of his canonization, it has grown faster. Sancoale, his village and where the Sanctuary dedicated to him is located, drew a large number of people and the Church plans to include a Basilica dedicated to Goa’s own Saint in the village.

“Sancoale has been the epicentre of the devotion of Bl Joseph Vaz since there exists the oratory room of his paternal house, the shrine and also the façade of the old Church of Sancoale where he surrendered his life to Mother Mary. Since there is no land available to develop the place around the existing shrine to cater to the growing numbers of devotees, executing any plans at the present shrine are out of question as things stand now,” Fr Eremito Rebello the Vice-Postulator for the Cause of Canonization said.

St Joseph Vaz is described as a man much ahead of his times, introducing inculturation centuries before the Vatican would begin to promote it after its Second Council in the 1960s.