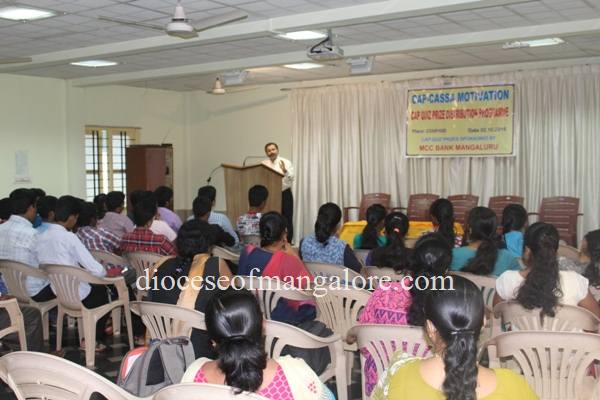 Oct 2, 2016: The CAP QUIZ 2016 Prize distribution, CASSA (CODP – Andheri Hilfe Scholarship Students Association) annual get together and YET PUC students programme was jointly held on 2nd October 2016 in CODP’s Mother Theresa Hall. Floral tribute was paid to Mahatma Gandhi, the Father of our Nation on the occation of his birthday celebration. Mr. Michael D’ Souza, NRI Philanthropist from Mangaluru was the President of the programme. The Resource persons Mr. Cyprian Monteiro, the DDPI from Mangaluru and Mr. Alwyn D Sa, the Vice-Principal of St. Aloysius College, Rev. Fr Oswald Monteiro, Director of CODP and Rev. Fr. Vernon Vaz, the Co-ordinator of Guidance Cell were present on the dais. Mr. Harold Fernandes, Professional Director of MCC Bank and the Principal of Mahesh Degree College, Mangaluru were also present on the dais.

Fr. Oswald Monteiro, Director of CODP welcomed the dignitaries and resource persons. In his introductory speech he explained the basic objectives of Career Advancement Programme (CAP) which is to “motivate and guide our youth to go for higher education and to get employment in government jobs. He also explained other CAP activities conducted by CODP. He emphasized that our youth should aspire to become Government Officers.

Mr. Harold Fernandes, distributed the CAP Quiz prizes to the winners: First prize winners were Mr. Jason Lydon Quadros and Mr. Savin Leroy D Souza. He congratulated the winners and in his speech explained the ways to find opportunities and how to use it for their benefit. He further said that there are three things we cannot retrieve in life viz spoken words, lost opportunities and lost time.

Mr. Michael D’Souza, awarded second and third prizes to the winners viz Ruther Tyson Lewis and Shalini Rita Correa respectively. In his speech he explained that education is most important in life. He asked participants to define their goal. Some of them replied that they would like to become an IAS officer, Doctor, Charted accountant etc. He further explained that we should keep up our self esteem high and advised the students not to miss good opportunities in life.

The resource person Mr. Cyprian Monteiro in his speech motivated the students to take up government jobs. He said that there are so many vacancies in various Government departments/offices, but the Christian community youth do not take advantage of these available opportunities. He also guided the students to read the different types of general knowledge books, the daily news papers which will help them to write the competitive exams. Then he explained to the students the procedure to apply for the government jobs.

The next resource person Mr. Alwyn D’ Sa the vice principal of St. Aloysius College took the session on “Study Skills”. Before starting the session he conducted a few energizers like action songs. All students actively participated in it. He told students to be self confident and appear for the exams fully prepared and without fear. “Be happy with yourself is the key for success”.

Mr. Jeevan Moras, a MSW student said that he had appeared for the sub inspectors post in the Karnataka police recently. Now he studying for his post graduation (MA) in Arts in police administration from Annamalia University in Chennai. He further explained the procedure to apply for the government jobs and gave them some websites where they could apply online for Government jobs. Totally 36 students participated in the programme.

The Programme ended at 1.00 p.m.  Mrs. Veena D‘Souza compeered the programme and Fr. Vernon Vas proposed the vote of thanks.