Centenary celebrations of Rosario Cathedral to conclude on 12-Apr-2015 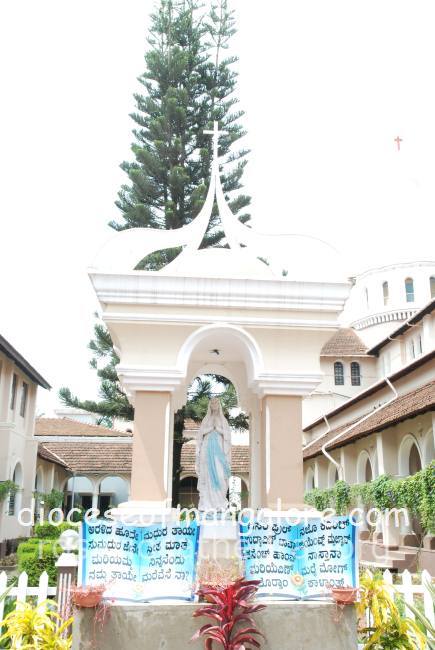 Mangaluru, Apr 7: One of the most magnificent historical monuments of Mangaluru, Rosario Cathedral is concluding year-long celebration of its centenary with the finale taking place on Sunday, April 12.

Rosario cathedral parish stands as a testimony to the advent of Christianity and development of the region in various sectors for the past four and half centuries.

Significance of Cathedrals in Catholic Church:

A cathedral is a throne of Bishop. It also has a specific ecclesiastical role as the seat of the bishop. Though the bishop of Mangaluru at present resides at Bishop’s House, two kilometers away from it, Rosario cathedral technically remains Bishop’s church and parish. On every major ceremony and feasts the bishop says mass at the cathedral and graces the ceremony.

Rosario cathedral functions as a social meeting-place for many people, not just people from the city, but also, on occasions, for the entire diocese. Annual Eucharistic procession, chrism mass and priestly ordinations are some of the major events which take place at the cathedral for which thousands of faithful congregate.

Rosario parish is one of the oldest parishes in Mangaluru region, the other two being from Paneer and Farangipet.

Over 447 years from its inception, Rosario parish has seen many churches located in different places in Bolar area.

The first church was a small chapel established in 1568 by the Portuguese missionaries. In Tulu Rosario cathedral has been called as Poyyada Ingregi, which means church built on sand. It was also called factory church in English because of its proximity to a factory.

St Joseph Vas played an important role in the history of Rosario Church in 1691 by renovating the then thatched church.

In 1784, Tipu Sultan’s forces destroyed the Rosario church. The next church which the devotees built was erected in 1813 at the present location. It is said that before that the church had been rebuilt thrice.

On April 16, 1850 Rosario church was raised to the rank of cathedral. Rosario parish once upon a time extended over the entire western half of Mangalore – from Nethravati to Gurpur Rivers. But later the original parish gave rise to several parishes in the course of time. Urwa was the first to be carved out in 1865. Kulur in 1888, Bejai in 1912, Bendur in 1914, Cascia in 1935, Derebail in 1939 and Thannirbavi in 1950 became separate parishes.

In 1910, the church structure was demolished to build a new beautiful place of worship worthy of the status of a Cathedral when Fr Henry Buzzoni was the Vicar. Jesuit brother Divo an architect from Bombay contributed immensely for the construction of the church with his designs. The cathedral was modelled on the lines of St Peter’s Basilica in Rome. It took 14 years to complete the structure but the church was formally opened in 1915. The main altar was consecrated by Bishop Perini on April 3, 1924.

This is the only church in the diocese with a magnificent dome crowning the spacious sanctuary. The Cross on the dome of the Cathedral served as a beacon to the sea-farers in the past. Fr Buzzoni also erected a belfry tower and installed four bells imported from Italy at the cathedral.

The royal stone emblem of the Portuguese king is lying at the entrance of the Cathedral to this day marking the landing of Portuguese in Mangalore. Bishop Nicolas Maria Pagani SJ was consecrated as the Bishop of Mangalore on October 25, 1885 at the Cathedral.

The cathedral managed earlier by Carmelites and Jesuits for years was transferred to secular clergy on January 12, 1923.

The cathedral is also a final resting abode for bishops in the sanctuary especially behind the altar. The mortal remains of the last bishop Basil S D’Souza were also interred in this Cathedral in 1996.

The statue of Mother Rosary displayed on the corridor of the cathedral just outside the altar has been known as Statue of Miracles. The wooden statue, which was carried and buried in sand by some parishioners during the destruction of the church by Tipu Sultan’s forces, remained in sand during the captivity. It could not be retrieved as the persons who hid it had died. But on an unknown date it appeared to a fisherman on the sea shore. He brought it home and then gave it back to the church where it belonged. Since then the statue has remained at the cathedral and has become the centre of attraction and devotion. It was retrieved by a miracle and it has been doing miracles in the lives of devotees.

Romanesque architectural characteristics are seen at Rosario Cathedral. Cathedrals have certain complex structural forms which display a higher level of contemporary architectural style and the work of accomplished craftsmen, and occupy a status that an ordinary parish church does not have.

The complex structure of Rosario cathedral is made up of a series of matching arches – more than 48 major arches including 12 central arches with over a fifty sub-arches. The side verandah periphery has about 45 smaller arches.

The dome of this Cathedral is a significantly unique structure with heavy metal ribs, minor metal reinforcements, small red bricks and mortar, water-proofed with local methods. The dome virtually replicates that of St Peter’s Basilica in the Vatican but in a smaller size. The construction of such a large, stable and beautiful structure even before sophisticated construction equipment existed is seen as a marvel.

The present parish priest is Fr John Baptist Crasta. Fr Amith Rodrigues, the assistant priest, Fr Alwyn Serrao, the principal of Rosario College and Fr Rocky Fernandes also reside at the cathedral. Dolphy D’Souza and John D’Silva are president and secretary of the parish pastoral council respectively. The cathedral has been extensively renovated for the centenary celebrations retaining the sanctity as it existed before.

Prior to that Holy Eucharist will be celebrated at 4.30 pm where Dr Aloysius will be the main celebrant and bishops of Belthangady, Belagavi, Gulbarga, Ballary, Shivamogga and Bareily will attend the Holy Eucharist. Dr Gerald Isaac Lobo, Bishop of Udupi will deliver the homily.