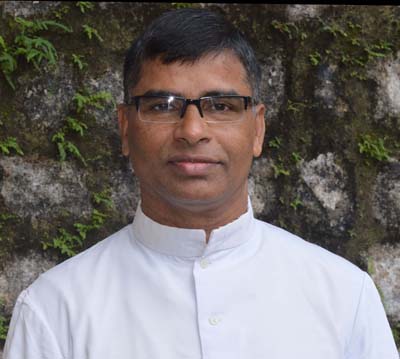 Fr Charles Menezes  has been appointed the international director for IYCS – JECI (International Young Catholic Students) with effective from July 24, 2015 for the year 2015 – 2019.

Fr Charles Menezes was born on October 18, 1963 as the third among five children – four sons and one daughter – of the late Louis and Mary Menezes of Moodubelle, Holy Family Ward. He had his higher primary and high school education in the Church Aided Higher Primary and St Lawrence High School respectively. While in high school, Charles was took a keen interest in sports, especially athletics. Charles continued his PUC education at the Poorna Prajna College, Udupi. During these years he developed an interest in singing and was a member of the Moodubelle parish choir. Meanwhile he also joined the Catholic Youth Movement (CYM) and became its secretary while studying in the second year PUC.

After being ordained a priest, Fr Charles Menezes was appointed as the assistant parish priest at Agrar near Bantwal where he served for two years. Later, he was transferred to Cordel (Kulshekar) parish where he worked for four years and thereafter at Vittal for one year before being appointed as the assistant director for the Mangaluru diocese of the Young Christian Students (YCS) and the Young Students Movement (YSM) in 1997. While YSM is meant for the school going children between the age of 13 to 15 years, that is, 8th to 10th standards, the YCS is meant for students in the age of 15 to 18, that is, for the students of First Year and Second Year PUC, where as the Indian Catholic Youth Movement (ICYM) is meant for those who are in the age group between 18 to 28 years.

When asked how he came to be appointed as the assistant director for the Youth, Fr Charles said that when he went to Cordel as the assistant parish priest, he found that the youth movement in the parish had ceased to function due to some reasons and the students studying in PUC had no opportunities to get organized and be active. In order to provide a proper direction to the adolescent youth and to channelize their energies in positive way, Fr Charles took the initiative and started the YCS for the PUC students of the parish. The efforts of Fr Charles bore fruit and a large number of PUC students joined the movement and became quite active in the parish.

As the work of organising and galvanizing the youth through YCS was noticed and appreciated by the authorities concerned, after completing one year as the assistant parish priest at Vittal, Fr Charles was appointed as the assistant director for the Mangaluru dioces of YCS and YSM on the recommendation of the director, Fr Alwyn who is presently national ICYM director. Fr Charles was assigned the full charge of both YCS and YSM, a responsibility that he carried forward with dedication and ability till 2005.

Fr Charles said that the formation of the Catholic students from 1st to 10th standard was taken care of by the Sunday Catechism classes. After SSLC a few students joined ICYM and the PUC students were completely left out of any youth movement. Either they had to join the ICYM or be without any youth activity. Realising that the Christian students should be given an opportunity to be part of a youth movement at the crucial stage of adolescence, Fr Charles extended the scope of YCS to include PUC students in 1997. Fr Charles said that it was a big task to convince the diocesan authorities and the students about the need to extend YCS movement to the PUC students.

After convincing the parties concerned about the efficacy of the youth movement, during the first year after taking charge, Fr Charles succeeded in including PUC students from 24 parishes in the YCS movement. By the time he completed the term as the assistant director in 2005, the YCS was extended to 108 parishes which presently covers 136 parishes.

In 2005, Fr Charles was transferred to the Nirmarga parish as the parish priest where he served for five years with great dedication before being appointed as the YCS/YSM national director during the 15th National Council of YCS/YSM held in Mangaluru from May 14 to 20, 2010. Fr Charles is presently stationed at the national office of YCS/YSM at Mylapore, Chennai.