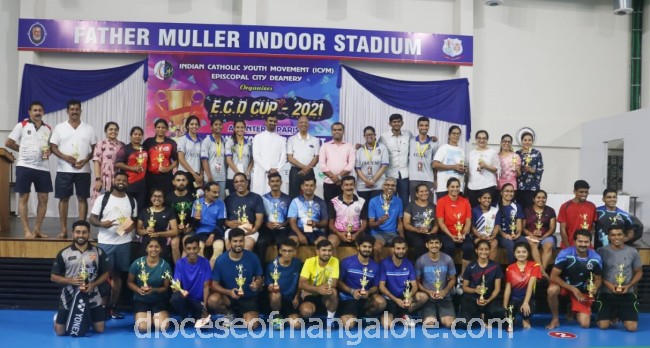 Delitia Pereira welcomed the guests and the gathering. V. Rev. Fr. Vincent Monteiro in his message wished everyone good luck for the success of the event. Most Rev Dr Aloysius Paul D’Souza – Bishop Emeritus and Mr. John Errol Samuel Patron Sponsor of the tournament were felicitated by the dignitaries on the dais and Fr Anil Pinto – Director ICYM ECD spoke a few words about them. Bishop Emeritus in the Presidential address encouraged everyone to organise such programs. Trophies were unveiled by the dignitaries on the dais. Inaugural ceremony concluded with vote of thanks by Sonali Rodrigues and mementos were given to the Dignitaries by Fr Anil Pinto. Total of 190 teams participated in the tournament. Priests from Mangalore Diocese also took part in the tournament.

There were 10 referees for the tournament. Mr Chandrashekar was the main referee.