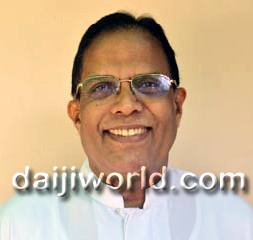 Almost two years after the brutal murder of Fr K J Thomas, the then Rector of St Peter’s Pontifical Seminary in Bengaluru in the small hours of the Easter feast on March 2013, the vacant post will now be filled when Jesuit priest Fr Joseph Benedict Mathias from Shirva, Udupi formally takes over as the new Rector on February 12.

The appointment of the Jesuit priest, widely known as Fr Joe Mathias, who will be turning 68 on April 16, has been made by Vatican’s highest ecclesial body, Congregation for Evangelisation of Religious Peoples.

He is presently serving as Director, Professor and Therapist at National Vocation Service Centre (NVSC) and Chief Editor of Asian Journal of Vocation and Formation (AJVF) in Pune.

Given the raging controversy over the language issue with a section of Kannada priests seeking control over the Seminary, the appointment of a priest of Udupi origin with Konkani as mother tongue could well become a bone of contention. However, the high educational qualifications and experience of Fr Joe Mathias might blunt the criticism and silence all the detractors.

Fr Mathias has done his BA from Ranchi University and BPh (Philosophy) from Sacred Heart College, Shembaganur, Tamil Nadu, B Th (Theology) from VidyaJyothi College, Delhi, B Cl (Canon Law) as well as MSc and Licentiate in Psychology from Gregorian University, Rome.

He was born in Shirva near Udupi on April 16, 1947 as the fifth among 12 children, eight sons and four daughters to late Fabian and Mary Mathias. His immediate elder sister, Sr Fabiola is a nun in the Bethany Congregation. He had his primary and higher primary education in Don Bosco and St Mary’s Schools in Shirva. Having decided to join the Jesuit order and work as a missionary in the remote Ranchi Province, he went to the Jesuit Formation House of Gonzaga House at Mangaluru from where he continued his studies from ninth up to PUC in St Aloysius High School and College.

Having confirmed in his vocation, he joined the Jesuit Novitiate at Sitagarh in Hazaribagh on June 28, 1964.

Journey from Shirva to Ranchi to Pune

When asked what prompted him to join the Jesuit Congregation and that too in the remote Province of Ranchi, Fr Joe Mathias said that he was quite influenced by the Belgian Jesuit Missionary, Fr Constant Lievens (1856-1893) regarded as the `Apostle of Chotanagpur (Jharkhand) and Chattisgarh,’ who worked among the tribal people especially Mundas against forced labour and indebtedness.

After completing two years long novitiate, he did juniorate at Mount St Joseph’s, Bangalore for one year and went back to Ranchi where he completed graduation in Arts at St. Xavier’s College. The next stage in the training for priesthood was the study of Philosophy which he did at the Sacred Heart College, Shembaganur, Tamil Nadu followed by Theology at St Mary’s College, Kurseong in Darjeeling which was shifted to Delhi with the new name of VidyaJyothi. Having completed the full training for priesthood, he was ordained a priest on May 11, 1974 and he took final vows on August 15, 1984.

Fr Joe Mathias, who had joined the Society of Jesus on June 28, 1964 will be completing 50 years of his religious life and his elder sister, Sr Fabiola of Bethany Congregation is also completing 50 years of her First Profession in 1964. The Golden Jubilee of religious life of both Fr Joseph Mathais and Sr Fabiola was celebrated with a thanksgiving mass at Our Lady of Health Church, Shirva on June 28, 2014 with Udupi Diocese Bishop Most Rev Gerald Lobo as the main celebrant.

Fr Joe Mathias has the rich professional and teaching experience of being the Professor of Pastoral Psychology from 1979 to 1994 besides being the Rector of the VidyaJyothi Jesuit Theologate in Delhi from 1988 to 1994, South Asian Assistancy Delegate for Jesuit Formation, New Delhi and Superior of the Jesuit Residence as Provincial of India at New Delhi from 1994 to 2000. He was the Founder and Director of the Institute for Formators in Bangalore and continues to be on its staff, Rector of Papal Seminary at Pune from 2000 to 2004 and Visiting Professor of JnanaDeepaVidyapeeth (JDV), Pune, Vidyajyothi, Delhi and Mater Dei, Goa. He is also serving as the Director of NVSC, Pune and Secretary of CBCI’s National Office for Clergy and Religious from the year 2004.

Jesuits Among the Chosen by Pope Francis

Fr Joe Mathias acquired sufficient experience in psychology by undergoing internship at Catholic Psychiatric Hospital, Philadelphia, USA and while serving as Moderator for General and Provincial Chapters of Religious Congregations of Men and Women in India and abroad.

Incidentally, it is significant to note that the two major ecclesial appointments as far as the Roman Catholic Church in Karnataka is concerned after Pope Francis, who is the first Jesuit to become the pontiff, are from the Society of Jesus. The vacant post of Bishop of Shimoga following the appointment of Bishop Gerald Lobo as the prelate of the newly carved out Udupi Diocese was from among the Jesuits with Fr Francis Serrao, the then Provincial of the Society of Jesus in the Karnataka Province, and now the vacant post of the Rector of the St Peter’s Pontifical Seminary in Bengaluru is also from among the Jesuits with Fr Joe Mathias, the former Rector of the Papal Seminary in Pune.

Fr Joe Mathias is highly regarded as a scholar and pioneer in integral human formation for the clergy and the religious with a special emphasis on the formation of the priests and the religious with emotional and personality problems through counselling, which he terms as psycho-spiritual approach to priestly and religious formation. Promotion of vocations and improvement in the quality of spiritual leaders that is required for meeting the challenges of the modern world with a thrust on human formation, self-transformation, environment for integral formation, pastoral leadership, namely, the all-inclusive Integral Human Formation for clergy and religious are considered the focus of his ministry.

He has conducted and participated in many courses, seminars, workshops and retreats on various aspects such as Anthropology of Christian Vocation and Formation; Transformative, Leadership to Animate Community for Mission; Wholeness and Holiness for Refounding of Consecrated Life Today; Personality Integration for Wholeness and Holiness; Basic Skills in Counselling; New Pedagogy for Integral Formation; Psycho-Spiritual Integration of Sexuality in Celibate Life; Vocation Promotion; and Psycho-Spiritual Integration.