“Journalists have the power to bring change in the society by transmitting the positivity”, Dr Zenica D’Souza 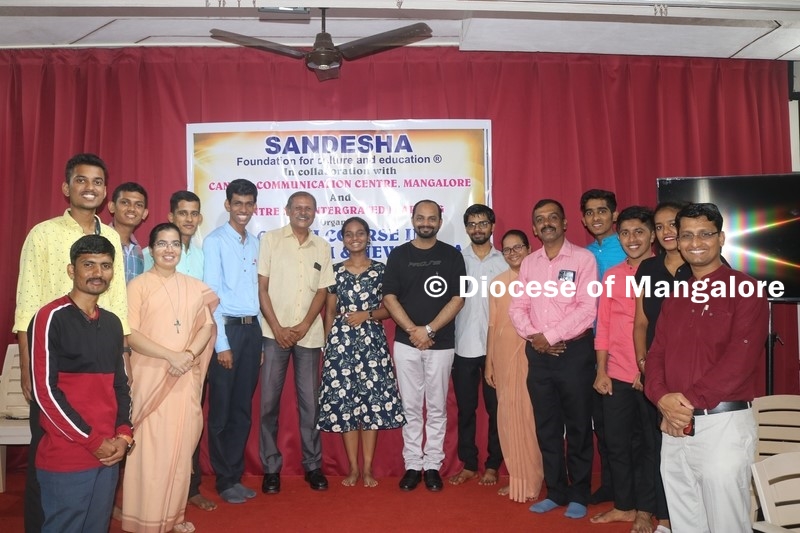 MANGALURU, DECEMBER 18: The recent achiever of Bhishak Bhooshan Puraskaram in the field of Ayurveda, Dr Zenica D’Souza, Professor and HOD of Kayachikitsa and Research Coordinator at Yenepoya Ayurveda Medical College and Hospital, Mangalore quoting, “Pen is mightier than sword”, said, “Journalists have the power to bring change in the society by transmitting positivity and truth in a digital era covered with fake reality.” She was the chief guest at the concluding ceremony of crash course in Journalism and New Media organised by Sandesha Foundation for Culture & Education® in collaboration with Canara Communication Centre, Mangalore (CCC) and Centre for Integrated Learning, Mangalore (CIL) held at Sandesha, Nanthoor here on Saturday.

Dr Zenica expressed her concern over the present condition of democracy that today the pillars of democracy are shaken by the evil forces. Journalists have the power to influence the minds of people at large. So that the positive vibes may spread across the globe and effectively fight fake news.

Mr Roy Castelino felicitated the participants with certificates of completion. He said, “As a journalist one must give equal importance to print media along with new media. News collected through newspapers is more authentic and reliable than WhatsApp and Facebook.” Further he said that in our community there are very few people who can respond and comment on certain news items which require immediate attention and response in upholding the truth. He urged the participants to be active contributors to society on social media platforms.

Mr Roy enthused the participants to raise their voice against false news and be conscious of the rights and duties guaranteed by the Constitution. He said, “The constitution is a weapon against all the problems and is the solution for all the problems in our country for it treats all equal without discrimination of caste creed and colour.”

Mr Nandagopal in his remarks over the crash course thanked every participant joining this crash course. He said, “The spirit and enthusiasm of the participants made the course more effective and interesting than the content being delivered in a few hours.” He admitted that only a foretaste of journalism was given over two weeks. Hence, he urged participants to continue to learn and master the topics and contribute to the society.

Rev. Fr Francis Assisi Almeida, in his presidential address stated the legal aspects of freedom of the journalists. He said, “Although the Constitution guarantees the Freedom of Speech and Expression, journalists come under certain restrictions as well.”