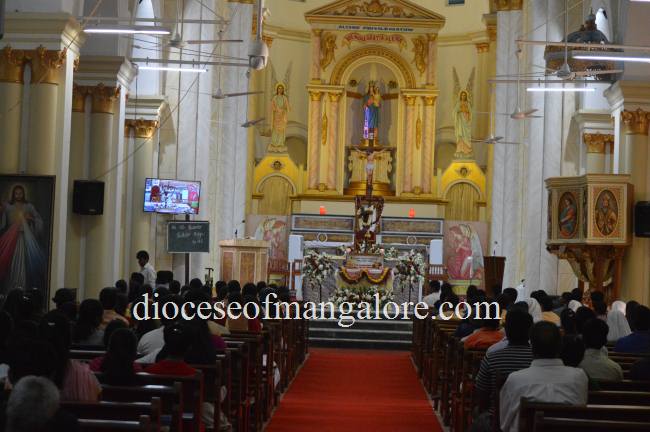 The National Youth Convention (NYC) Cross which arrived to the city after travelling in other parts of Karnataka was welcomed at Rosario Cathedral on Sunday December 11, 2016.

The Cross was later kept in the Rosario Cathedral and Fr Ronald along with Fr. Anil Lobo, Director of ICYM Episcopal City Deanery conducted the prayer service.

The NYC Cross will be taken to all the 12 deaneries of Mangalore and finally be brought to the NYC venue St Joseph Engineering College on January 18, 2017.

In Karnataka region the 10th NYC Cross journey commenced in the archdiocese of Bengaluru on April 3 this year and thereafter continued through Mandya, Mysuru, Chikkamagaluru, Ballari, Kalburgi, Belagavi, Karwar, Shivamogga, Bhadravathi, Puttur, Beltangady and Udupi dioceses, travelling a distance of 2,000 kilometers and was welcomed in the diocese on December 11.