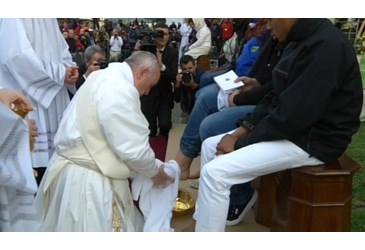 Rome, Mar 24 (ABC News) : Pope Francis washed and kissed the feet of Muslim, Christian and Hindu refugees Thursday and declared them all children of the same God, as he performed a gesture of welcome and brotherhood at a time of increased anti-Muslim sentiment following the Brussels attacks.

Francis denounced the carnage as a “gesture of war” carried out by blood-thirsty people beholden to the weapons industry during an Easter Week Mass with asylum-seekers at a shelter in Castelnuovo di Porto, outside Rome.

The Holy Thursday rite re-enacts the foot-washing ritual Jesus performed on his apostles before being crucified, and is meant as a gesture of service. Francis contrasted that gesture with the “gesture of destruction” carried out by the Brussels attackers, saying they wanted to destroy the brotherhood of humanity represented by the migrants.

“We have different cultures and religions, but we are brothers and we want to live in peace,” Francis said in his homily, delivered off-the-cuff in the windy courtyard of the center.

Several of the migrants then wept as Francis knelt before them, poured holy water from a brass pitcher over their feet, wiped them clean and kissed them.

Francis was greeted with a banner reading “Welcome” in a variety of languages as he walked down a makeshift aisle to celebrate the Mass. But only a fraction of the 892 asylum-seekers living at the shelter attended, and many of the seats were left empty. Those who came out, though, received a personal greeting: At the end of the Mass, Francis greeted each refugee, one by one, posing for selfies and accepting notes as he moved down the rows.

Vatican rules had long called for only men to participate in the foot-washing ritual, and past popes and many priests traditionally performed it on 12 Catholic men, recalling Jesus’ 12 apostles and further cementing the doctrine of an all-male priesthood.

Francis shocked many Catholics within weeks of his 2013 election by performing the ritual on women and Muslims at a juvenile detention center. After years of violating the rules outright, Francis in January changed the regulations to explicitly allow women and girls to participate.

The Vatican said Thursday that four women and eight men took part. The women included an Italian Catholic who works at the center and three Eritrean Coptic Christian migrants. The men included four Catholics from Nigeria, three Muslims from Mali, Syria and Pakistan and a Hindu man from India.

refers to baptized Christians, the decree also said that pastors should instruct “both the chosen faithful and others so that they may participate in the rite consciously, actively and fruitfully,” suggesting that the rite could be open to non-Catholics as well.

The Vatican spokesman, the Rev. Federico Lombardi, said the Vatican norms are meant for traditional liturgies in Catholic communities, not necessarily a unique papal Mass where the overall message is one of universal brotherhood and the love of God for all his children.

“We must always take the pastoral context into account,” Lombardi said in an email. “Norms that are appropriate for a parish celebration aren’t to be considered binding on a very unique celebration of the pope in a refugee center with a non-Christian majority.”

Francis clearly intended the message to be universal.

“All of us, together: Muslims, Hindu, Catholics, Copts, Evangelicals. But brothers, children of the same God,” he said. “We want to live in peace, integrated.”