Preterm Baby Weighing 600 Grams, Makes It Through at Father Muller’s 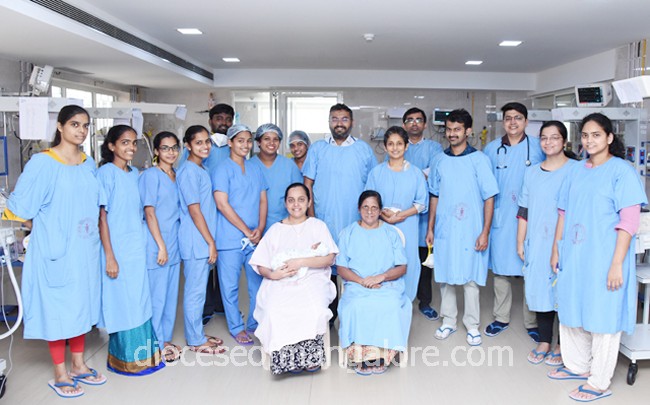 Deepika (Mother) came to the hospital with threatened preterm labor on 24th June early morning. The prompt management by the obstetric team led by Dr Joylene D’Almieda assured the best outcomes for both baby and mother.

The initial prognosis for the preemie born due to the premature birth and underdeveloped vital organs looked very slim as his chances of survival looked bleak; but the 141-year-old hospital in Mangalore with its state of the art NICU facility and experienced faculty managed to save the baby, making him the youngest (most premature) and one of the lowest weighing babies to survive with such prematurity, at the hospital.

“Loyden, born on June 26th, was so small that he could fit into the palm of one hand and was so weak that during the initial intensive care his weight dropped below 600 grams, but the doctors and nurses gave in everything to save my son despite those relentless beeps and alarms. When I had lost hope initially Dr Bukelo and his team encouraged us to be calm and strong and I remain forever grateful to him and all those who have helped and prayed for my baby”, said 30 year old mother, Mrs Deepika who is married to Mr Loyed Mascarenhas.

“Survival of such premature infants is always a challenge and requires a team effort. Loyden’s graduation out of NICU after 90 days speaks volumes of the dedicated service of the neonatologist, Neonatal nurses and post-graduates at Father Muller’s NICU”, said Dr Mario Bukelo.

Father Muller’s NICU is one of the largest in coastal Karnataka with 3 Consultant Neonatologists, Dr Saritha Paul, Dr Praveen B K and Dr Mario Bukelo. The facility has a 30 bed capacity; having state of the art facility with 7 ventilators, 3 HFNC, 3 Bubble CPAP, 1 Therapeutic body cooling machine and best in the class phototherapy units giving its best services with experienced staff round the clock.

The standard gestational period for a baby is 40 weeks. According to the World Health Organization, about one million children die each year across the world due to complications of premature birth; with India topping the list with most number of preterm deliveries in the world. Despite all these challenges the neonatal intensive care team led by Dr Mario Bukelo and assisted by Dr Preetham Tauro went ahead against the odds, to save the infant. All are happy that this pre-term baby will lead a healthy life as its organs are now functioning well.

Richard Scott William Hutchinson is the baby in US, who holds the Guinness World Record for being the most prematurely delivered baby to survive, born at a gestational age of 21 weeks 2 days, with 340gms of birth weight.

Loyden was discharged on September 24th, fighting against all odds in becoming the first baby born at the Father Muller Hospital to survive so young at just 25 weeks and 6 days and after an intensive care period of 90 days.