Protest held against atrocities on Christians before the DC’s Office, Mangalore 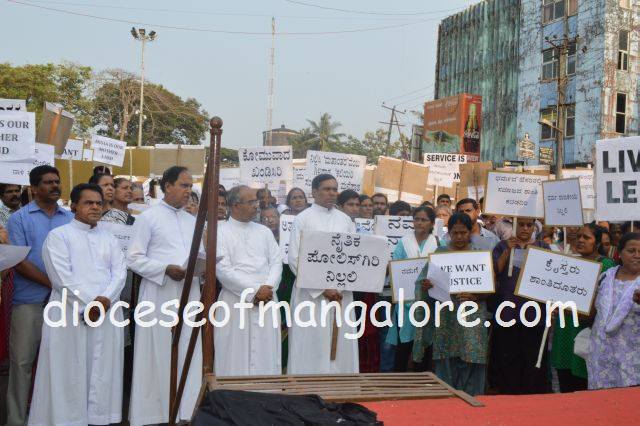 All Christian associations in the Diocese staged a protest against the increasing atrocities on Christians in front of the DC’s Office here, on March 27.

Addressing the protesters, social activist Roman Lobo said that the atrocities on Christians are increasing in our country. “Churches have been attacked in Delhi after the announcement of the election but the Prime Minister did not react on the church attacks. In another incident in Jasola, a group of miscreants threw stones and shattered a window pane, but the police said that a group of kids were playing outside which resulted in a stone landing inside the church and that there was no evidence of any other motive.”

“In the name of conversion, we have been harassed and our churches have been vandalized. We ask if there is any evidence of conversion? If we convert, then why is our population decreasing? Are others converting our people to other religions? People go to gulf countries, if they are asked in which institution they studied, 90% of them will say that they studied in Christian institutions. Is educating people our mistake? Is serving the poor and the downtrodden our mistake? Is taking care of the destitutes our mistake? Is providing shelter to the homeless our mistake? If it is not, then why are you blaming that Christians are converting? If we were really interested in conversion, by now our population would have crossed more than 50 crores.”

“A leader had recently commented on Mother Teresa’s service saying, “The service may be good, but there’s a motive behind it. The idea is to make the person feel obligated, so that they become Christians.” Yes, Mother Teresa has converted a Hindu to be a true Hindu, a Muslim to be a true Muslim and a Christian to be a true Christian.” He further said that Christianity teaches to love one another. “We are peace lovers and we forgive people, but do not test our patience. Now we have lost our patience and are in the streets to fight for justice. We are all Indians and we have the right to lead a respectful life in this country under the rights provided by the Constitution.” He also said, “Let the trouble makers transform into a good human being and may peace and harmony prevail in this country.”

The former president of Bharatiya Yuva Sanchalan, Nelson Monis said, “True religion always unites and never divides humankind, nor does it teach to insult other religions or persons. Every religion teaches brotherhood and unity. Hindu Dharma teaches ‘Sarve Janah Sukhino Bhavantu’ (May all men be happy) but such people blaming Christians is not fair. In every programme, the minority especially the Christians have been blamed for conversions. If we are really interested in conversion, we would have increased our population but our population has decreased to 2%. Christians do not harm anyone nor do we attack anyone, then why have we been targeted? Why have our churches been vandalized? We need an answer.”

He further said that every citizen in this country has the right to freedom of religion and the Constitution guarantees every citizen, the liberty to follow the religion of his/her choice. “Prime Minister Narendra Modi recently said, ‘The only religious book is the Indian Constitution, only prayer is welfare of all and nobody has the right to discriminate on the basis of religion’.”