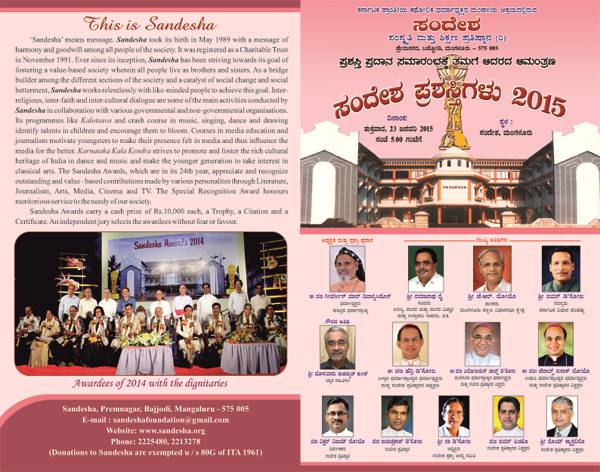 “Sandesha Foundation for Culture and Education, Mangaluru, managed by Karnataka Regional Catholic Bishops Conference, has been for the Past 23 years honouring personalities who have made significant contribution to Kannada, Konkani and Tulu Literature, Art and Culture. By choosing to award the deserving persons based on the basis of merit, the Sandesha Awards have gained recognition of their own standard. Here I am before you to announce 24th Sandesha Awards recipients” said Fr Victor Vijay Lobo – Director, Sandesha Foundation, during the press meet held at Mangalore Press Club.
Na D’Souza, Dr Na Damodar Shetty, Sara Abubakker, Chandrakala Nandavar, Eric Ozario and Richard Louis were the Juries of Sandesha Awards. These Awards have been selected with guidance of Fr Victor Vijay Lobo, the Director of Sandesha.

Born in Hanabe village in Doddaballapura, 1942. He was awarded doctorate for his writing ‘Kannada Kavya Kanda Hennu’. He has held various offices in the Kannada Study Centre of Bangalore University. He was the director of the Prasaranga. He was also the state honorary secretary of the Kannada Sahitya Parishath. His two-volume work ‘Kannada Sahitya Charitre-Charitrika Belavanige’ presents history with a sociological angle. He has done specializes studies in vachana sahitya. His ‘Mahabharata Manthana’ re-presents the Indian epic ‘Mahabharata with a humanitarian perspective. He has written several plays. He was the founder president of Karnataka Sahitya Parishat. He is keenly interested in subaltern culture and the current events.

Born in Panambur in Dakshina Kannada district in 1959. She is a multilingual cine-artist. She made a debut as a heroine in Tulu film ‘Kaas Daaye Kandani’ and won state award. She has acted in more than 75 films. She has also directed five films- She won special national award for her acting in ‘Tayisaheba. The same film has won 24 other awards. Her children’s film ‘Tuttoori’ has bagged national award. She is a masters in political sconce. She won doctorate for her dissertation on the rehabilitation of destitute women. She was the first woman president of Karnataka Film chamber. Besides State Rajyotsava Award, she has received numerous other awards. Presently, she is an MLC in Govt of Karantaka.

Mr Henry D’Souza was born in Basrikatte in Chickmagaluru district in 1943. Later,  in 1965 he migrated to Mumbai where is established himself as a singer-musician. The two Konkani songs he scripted five decades ago ‘Ye Ye Katrina’ and ‘Ami Dogee Sezari’, have retained an unparalleled popularity even till date. He has composed and directed more than 2000 songs and has performed in various countries. He has sung more than 200 Konkani songs in the Akashavani.

She is the headmistress of the Sneha Educational Centre, Sullia. It is a unique nature friendly educational centre which imparts education in huts located amidst trees, and aims at providing a holistic education. Every class in this school is provided with a library. The students in this institute learn to nurture medicinal plants. They have access to learning various arts, to library and multimedia. Intent on providing the best possible education to her children, she ventured into a Kannada medium school. Though non-curricular education gets a priority in her school, it has archived a cent per cent result.

Born in Padil, Mangaluru in 1969. He has been an actor from his childhood. Later, he joined the Tulu theatre. Thanks to his endeavour, the Tulu theatre earned a star value. He is a master of comedy and tragedy. Hence, he is popularly called as ‘Kusaldarase’. His stage performances cross ten thousand. He has won several awards in India and abroad. He has also acted in Tule films like ‘Oriyardori Asal’, ‘Aamet Asal Eemet Kusal’.

A great swimmer, born in Kodi Kanyana in Udupi district. He achieved a great feat by swimming 40 Kms. in six hours in the Arabian Sea in 2003. In 2004, he swam the distance of 50 Kms between Gangolli and Malpe beach in 11.30 hours. His name has appeared in the Limca Book of Records in 2011. He swam and covered the distance of 3.7 Kms from St Mary’s Island to Malpe by his hands and feet chained in just a matter of 2.43.35 hours and achieved the Guinness World Record. He has won awards like Yuvakridaratna, Rajyotsava Award.