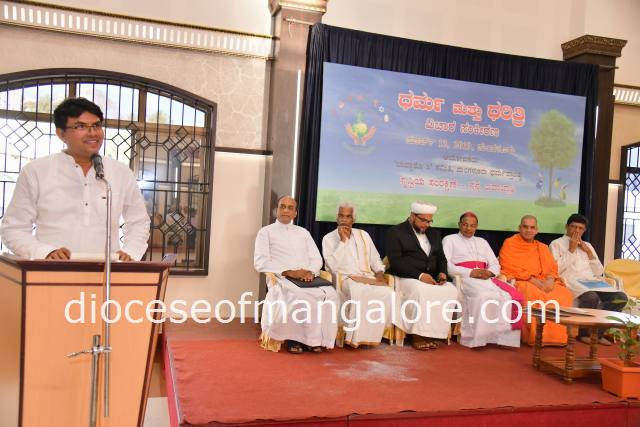 March. 15: Laudato Si’ Committee of Mangalore Diocese organized a Symposium on “Religion and Ecology” on Wednesday, 13 March 2019 at the Milagres Golden Jubilee Hall from 5 -8 pm.

The programme began with a glow art by Karnataka’s fastest artist Miss Shabari Ganiga who drew the Laudato Si theme, accompanied by theme song sung by professional singer Vidya Suvarna. The welcome address was delivered by Fr Richard D’souza, followed by briefing of the symposium by Rev Fr J B Saldanha. The symposium was inaugurated by watering of a sampling by all the dignitaries (mentioned above) on the dais. Addressing the audience Swami Ekagamyananda said, “We at Ramakrishna Mission had started our Swachh Mangaluru campaign five years ago with aim to make our City clean and green, and even though we have not been 100% successful, but we are happy that we have brought awareness among Mangaloreans about cleanliness. If people don’t use their commons sense, Swachh Mangaluru is never materializing”.

” Just to let you know that ‘Hindu’ is not a religion, instead is a culture. In our Hindu culture, Earth is considered as Mother. Religion and cleanliness should go hand in hand. The followers of Sanathan Dharma who have been adoring the sun, tree, and animals as God and goddesses, for the fact that they are seeing divinity in all creatures created by God. And it should be noted that ‘Swachh’ comes from Upanishads which is compulsory to follow in Sanathan Dharma. We need to be clean, both inside and outside of our body, and when we become persons with clean heart, we start thinking of others. Development, industries, infrastructure are needed, but they should be implemented wisely by not harming the environment. With our Swachh Mangaluru campaign we are aiming to recycle garbage at home so that it wont reach the dump yard. We can make Mangaluru clean and green, if we have a clean mind, determination and commitment” added Swami.

Moulana U K Abdul Aziz Darimi speaking on the occasion said, “In Holy Quran, religion is compared to a fruitful tree. Each religion has its own meaning and teachings. One of the phenomena that scientists have failed to find an answer to is how the water of oceans and seas cannot put out the magma! Moreover, how is it that this magma, in spite of its extreme temperature, is unable to vaporize seas and oceans? This balance between the opposites: fire and water on the ocean floors, and some sea bottoms, is a clear witness to the Unlimited Power of Allah”.

“Also in Quran it says that laziness and greedy mind of humans is a big danger for earth, more than anything else. Therefore we need to keep away from being lazy and become greedy. It is the Humans that harm the nature, and no one else. Animals and other creatures are innocent, as they become a part of saving and protecting nature as well as environment. It is time that we think about Mother Nature, so it becomes like a religion which everyone should follow who lives on this earth. We need to unite together forgetting about religion and caste, and work for the betterment of the environment, so that we can have a clean and green environment” added Moulana.

Muniraj Renjala said, “In the modern times, Jainism is considered as one of the most peaceful religions. It is one of the three most ancient Indian religious traditions still in existence. Jainism often employs concepts shared with Hinduism and Buddhism, the result of a common cultural and linguistic background. The name “Jainism” is derived from the Sanskrit verb ‘Ji’ (to conquer). It refers to the ascetic battle that Jain monks and nuns must fight against passion and bodily senses to gain enlightenment and purity of soul. Jainism has been confined largely to India although it has spread to Commonwealth nations via migrations of Indians”.

“And in Jainism “Jeeva”is considered as one of the important teachings of Jainism, where it explains that every creature has life and it lives on this earth. To protect nature, we need to practice ‘Ahimsa’, which includes protection of everything on earth. Five Great Teachings/Vows of Jainism are Ahimsa., Satya, Achaurya or Asteya, Brahmacharya, and Aparigraha. As per Jainism, if anyone hurts nature, he is not a true follower of the religion. Hence, our slogan should be ‘Live and let live’. Through this, we can experience peace and inner happiness. Let us look forward for a better environment, which will be green and healthy” said Ranjala.

Fr Alwyn Serrao referring to a few teachings in the Holy Bible said “When a religion takes the responsibility of protecting nature, it becomes a religious practice and makes a positive impact. The Holy Bible says that God gave the lordship to human over nature. It means that mankind was given the responsibility of nature. God made him the lord to show sympathy towards co-creatures. Violence against nature is a sin against God. In the Old Testament, many a times, God warned mankind for his cruelty towards nature. ‘Justice in the world’, the papal letter issued in 1971, clearly says that Holy Church has always upheld the respect towards other creatures and nature. It also emphasizes that earth is not a raw material which we can use according to our wish.”

In His presidential address Bishop Rev Dr Peter Paul Saldanha said, “Our main intention in organizing this programme ‘Laudato si’, since it is a new ideology to save nature to hand it over to our next generation in a better way. This implies a relationship of mutual responsibility between human beings and nature. Each community can take from the bounty of the earth whatever it needs for subsistence, but it also has the duty to protect the earth and to ensure its fruitfulness for coming generations. But a sober look at our world shows that the degree of human intervention, often in the service of business interests and consumerism, is actually making our earth less rich and beautiful, ever more limited and grey, even as technological advances and consumer goods continue to abound limitlessly. We seem to think that we can substitute an irreplaceable and irretrievable beauty with something which we have created ourselves”

“The ideology raises the slogan of ‘Leave the place better to live’. Protection of nature should be our most important mission because without nature, we cannot even imagine our existence. We all practice our religions the way we want. Now it is time to think about protecting nature which is as importance as practicing religion. It is very easy to deliver talks on protection of environment, but no one is ready to practice it. When religious leaders and religion takes this mission, it will become easy and everyone will come forward to save mother earth. So our programmes should be on this direction,” added Bishop.

Bishop further said, “Education in environmental responsibility can encourage ways of acting which directly and significantly affect the world around us, such as avoiding the use of plastic and paper, reducing water consumption, separating refuse, cooking only what can reasonably be consumed, showing care for other living beings, using public transport or car-pooling, planting trees, turning off unnecessary lights, or any number of other practices. All of these reflect a generous and worthy creativity which brings out the best in human beings. Reusing something instead of immediately discarding it, when done for the right reasons, can be an act of love which expresses our own dignity”.

Prizes were given to the persons won in the slogan contest on Laudato Si, which was in four languages- In Konkani Fr Vincent Menezes, Parish Priest of Paldane Church was the winner; in English-Harshini K from St Agnes High School, Mangaluru, in Hindi, Wafah from Kulur,a nd in Kannada- Fr Rupesh Madtha. There was yet another prize given to a person among the 178587 registered, and of which 150850 pledged- and the winning number was 149613, won by Lawrence Rodrigues of Kaikamba, who received a gold sovereign worth about Rs 30,000.

Organizer of the Laudato Si Louis J Pinto, who for the last ten years have been working hard for the betterment of green environment in Mangaluru, and also had organized cleanliness drive around Valencia and its vicinity, proposed the vote of thanks. The symposium was attended by over 200 people comprising of priests, nuns, lay people, students, young and old.