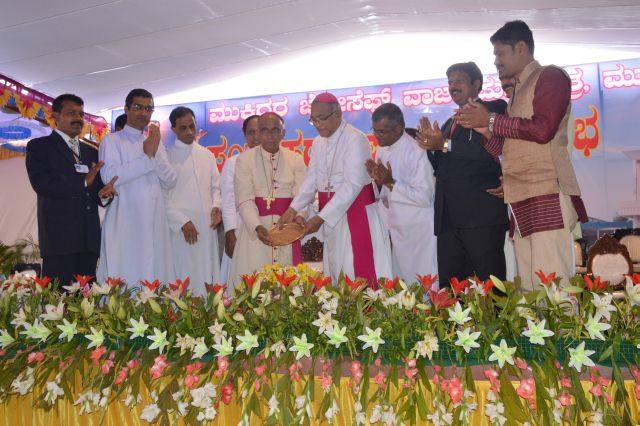 The three-day celebration to mark the canonization of Blessed Joseph Vaz at Mudipu shrine dedicated to the saint ended on a solemn note on Friday January 16.

As the state declared a day’s mourning in honour of former governor Rameshwar Thakur who passed away on Thursday January 15, the celebrations were sober with chief minister Siddaramaiah deciding to call off his participation in the event.

In the absence of the CM, Bengaluru archbishop Dr Bernard Moras unveiled the statue of St Joseph Vaz and the free meal programme for devotees by pouring rice into a pot.

Addressing the gathering, the archbishop said, “Giving food to the hungry is a noble work. Jesus also fed the hungry. May St Joseph Vaz intercede for all people who come to this place and pray. May their hunger be satisfied.”

Rajya Sabha MP Oscar Fernandes said, “It is a happy moment for all of us that BlessedJoseph Vaz has been canonized. We have witnessed his miracle in Mudipu. It is a joyous day and I want to thank the state government for giving all support to make this programme a successful one.”

Mangaluru bishop Dr Aloysius Paul D’Souza spoke on the life of St Joseph Vaz and said that he served in Udupi, Gangolli, Rosario, Panir and other places of the coastal region for four years. “May the prayers of all devotees who come to this place be answered. It is our good fortune that we received a saint in our own place,” he said.

Earlier in the day, mass was celebrated by archbishop Dr Bernard Moras. In his homily, he spoke on the life of St Joseph Vaz and said, “Even though he did not die as a martyr, he brought millions of people near to god. He had great devotion to prayer and always attended the mass. As much as he loved prayer, he also dedicated himself to serving the poor and the needy. He also had great devotion towards Mother Mary and recited the rosary everyday.
“He built a number of parishes wherever he visited and served in Kanara region for four years. When he was serving in Ullal area some people plotted to kill him and lay a trap. They told him there was a sick person who need communion, and believing them he went along to a remote area at night. When they were about to kill him, St Vaz hit the ground with his staff and knelt down. At that moment water poured out from the earth, and seeing his miraculous power, the killers ran away. Since then this place has become a shrine. When St Vaz heard of Christians being targetted in Sri Lanka, he took the lead to go that place.

“He also performed miracle in Sri Lanka. There was famine for many years. He conducted prayers in an open space with a cross in his hand, and then there was heavy downpour. After this, people believed in him even more. The king also gave him permission to preach the Gospel to entire Sri Lanka,” Dr Moras said.

“In Sri Lanka St Joseph Vaz set up 15 religious centres, 400 worship centres, a number of hospitals, orphanages and schools. After working for so many years, he passed away on January 15, 1711. After 300 years he was canonized by the Pope. He showed path of light which is shining even now. It is our responsibility to carry the light forward in future too. Let us all walk in the path shown by St Vaz,” he said.

In the evening, ‘Suzanna’, a play on Bible directed by Christopher Neenasam will be staged.