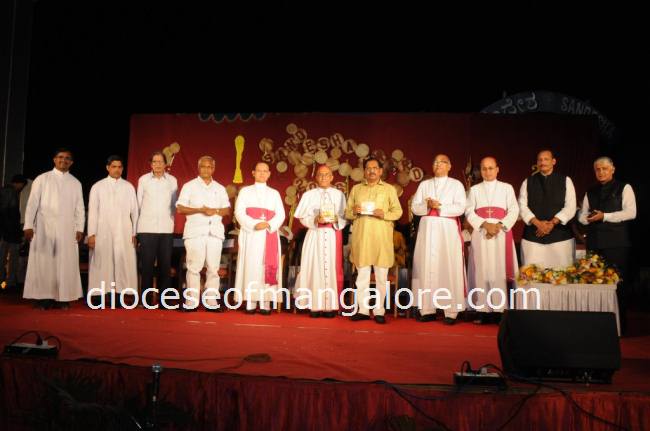 Mangaluru: The Sandesha Foundation for Culture and Education (under the auspices of the Karnataka Regional Catholic Bishops’ Council) presented the “Sandesha Awards 2016”, at Sandesha, Bajjodi here on January 16.

The programme began with an invocation followed by a prayer dance. Director of Sandesha Fr Victor Vijay Lobo welcomed the gathering.

President of the Sandesha award selection committee Dr Na D’Souza introduced the Sandesha Awards and the awardees to the gathering. He thanked all the committee members for their wonderful job in choosing the deserving candidates for the award. The presentation of the award ceremony was held and citations of the awardees were read out.

The awardees expressed their happiness on receiving the awards.

Home minister Dr Parameshwar said, “I am pleased to be here to take part in the Sandesha award ceremony. I thank MLA J R Lobo and Sandesha president for inviting me for this meaningful programme. Congratulating the entire team of Sandesha, Home minister Dr Parameshwar said that starting any organization or institution is not an easy task and completing 25 years is a great achievement for any organization. Now-a-days it is very difficult to run such organization. The service of Sandesha for 25 years is praise worthy. Sandesha has attempted to bring brotherhood and harmony in the society by recognizing the service of the people in their respective fields.

In the constitution there are three important aspects, equality, liberty and fraternity which every citizen of this country should follow. I think Baba Ambedkar while writing the constitution might have foreseen the problems the citizens of this great country would face and written the constitution in such a way that it would preserve peace, brotherhood and unity in this country. India is a country with most diverse cultures, no where in the holy books it is mentioned to fight in the name of religion. Sandesha has crossed all the barriers and started this institution to unite people through art, culture and music. There are challenges whether we like it or not. India was giving the message of peace. But now there are people who try to spoil the peace in the country by fighting in the name of religion, spoiling the brotherhood and harmony.

Recently the word “intolerance” has come up in our country, in which angle do we see intolerance. We have created bridges between religions. Every Indian has the right to lead his life, follow his own religion and to lead a peaceful life. Now someone is deciding about what one should dress, eat and follow which leads to intolerance. Missionaries have worked for the poor and the downtrodden, they have helped thousands of people and there is no second thought about it. When we talk good about their work they will be encouraged. India has unity in diversity, people who have been awarded the Sandesha Award today have served the society selflessly, they did not ask for any certificate. After Independence we have achieved a lot be it in food production or industry but we have lacking in unity and brotherhood. We have to work hard for unity and brotherhood in the society. While concluding Dr Parameshwar congratulated all the awardees and said, “We need to live with unity, harmony and brotherhood”.