Ceremonial Installation of Saints’ statues who served at Rosario Cathedral 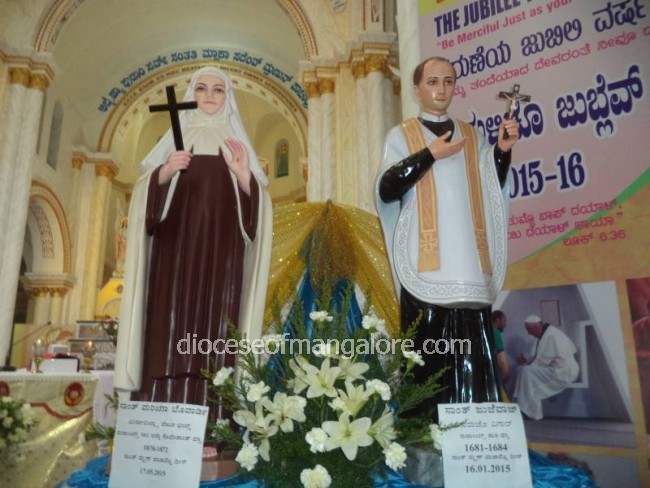 On Jan 10, 2016, at 8 am, Most Rev. Dr Aloysius Paul D’Souza, the Bishop of Mangalore concelebrated a well attended solemn Eucharistic mass. As the day of the religious (priests and nuns) was being observed the emphasis was on their mission. The Vicar of the Cathedral V. Rev. J.B. Crasta and V. Rev. Pius D’Souza OCD Episcopal Vicar for the Religious, Rev. Fr Paul S. D’Souza, Rev. Fr Rocky Fernandes and other priests of the diocese assisted at the mass.

After the mass statues of St Juze Vaz (Served here 1681-84) and St Mariam Baouardy (served here 1870-72), two dedicated religious who served here were permanently installed at the main foyer entrance of the Rosario Cathedral. Both the new saints were canonized in 2015; they lived and worshiped at Rosario Church, Mangalore.

Several priests and nuns from the area were present along with the faithful. The Bishop in his homily highlighted the coming of Christ to earth and the development of Christianity in Mangalore. He expressed appreciation for the work done by various groups of priests and nuns and the committed services rendered to people without difference in many spheres. Their dedicated services were always tailored to the needs of the needy and they served with great commitment. He exhorted them to continue and blessings of the Lord was theirs always.

Brief Recap of the two Saints who resided in Rosario Mangalore:

St Juze Vaz was ‘Vicar of Canara’ from 1681 to 1684. During his stay the saint Vaz undertook a series of missionary activities in Canara especially in Mangalore. He is said to have renovated Rosario Church in his times. He later went to Ceylon and is known as ‘Apostle of Sri Lanka’. Pope Francis canonized Juze Vaz on January 14, 2015 in Colombo, Sri Lanka.

This Saint of the Catholic Church – St MARIAM BAOURDY, of Lebanese origin was born on January 5,1846 in upper Galilee. It is said she was born after several years of marriage and after her parents made a pilgrimage to the birth place of Christ -BETHLEHEM. She was orphaned even before she was three and was adopted by relatives. Her piousness compelled the prioress of the convent to admit her as a novice nun and she was sent to Pau in France as part of the initiation in May 1867. The following year the then Bishop of Mangalore – Marie Ephrem OCD of France (Who died in 1873, and is buried in Rosario Cathedral Mangalore), on his visit there expressed his desire to have a group of nuns come over and start work on the West Coast of India. Obtaining permission from Vatican the head of the Carmelites mustered a pioneer group for the task. Strangely the fervent novice MARIAM BAOURDY was the youngest chosen for this mission. Destiny thus directed her to India.

On November 19, 1870 the courageous group (of which Mother Veronica the founder of the Apostolic Carmel here) after a gruelling journey of near 100 days landed at Mangalore port, via Madras, Vellore and Calicut. The rough voyage took the lives of four of the group which was not too unusual in those times. Commencing their mission of prayer penance and work to call down God’s blessing on this region they took up temporary shelter with the newly started “Carmelite” or “Apostolic Carmel” convent still flourishing not far from old port or ’Bundar’ in Mangalore city a hub of education. The room where the holy nun lived and prayed and the old chapel where on November 21, 1871 she took her first vows and the tree where she experience ecstasy are treated as sacred and preserved even today here.

Mariam took the name of “Sr Mary of Jesus Crucified” and was often referred to as the ’Little Arab’ among her community. Comparing her life with that of St (Sr) Alphonsa of Kerala; many similarities can be drawn. In keeping with her vows, she was called upon to return to France and left Mangalore on September 23, 1972. After a few years of exemplary holy life in Pau, France; she was sent to her mother land where she laboured hard to establish a large convent in Bethlehem, the place of Christ’s birth. She died at the young age of 33 on August 26, 1879. The important convent she founded in Bethlehem, reflects her greatness today. She was declared “Blessed”, a final step before sainthood, on November 13, 1983 at the Vatican. St. Mariam was canonised on 17 May 2015, by Pope Francis in Rome. Mariam Baouardy was instrumental in setting up the Mangalore Carmel based in Kankanady for over 140 years. The Carmel of Mangalore is the first Cloistered Carmel in India, now the prominent land mark Sacred Heart Monastery in Kankanady.

The meaningful hymn that is sung here in honour of this St Mariam Baourdy, translated from Konkani reads:

“Sister Mary of Jesus Crucified – your name is beloved,
Who once among us in Mangalore lived – Becoming for us a treasure”

On December 27, 2015 Sunday, the first statue of St. Mariam Baourdy, who lived for 2 years at St. Ann’s convent (between State Bank terminus and Rosario Cathedral) from 1870 to 1872, was taken from her historical abode to be venerated and installed at the Rosario Cathedral. A large number of devotees gathered at 7:45 am at St.Ann’s convent. The Vicar General of Mangalore Diocese V. Rev Msgr. Denis Moras Prabhu blessed the Statue and a colourful procession led by a band wended its way solemnly to the Rosario Cathedral, on a path that this saint would have often taken to the church more than 145 years ago. This was followed by a solemn mass with Rev. Frs. J.B. Crasta, Rocky, Vincent and Paul.