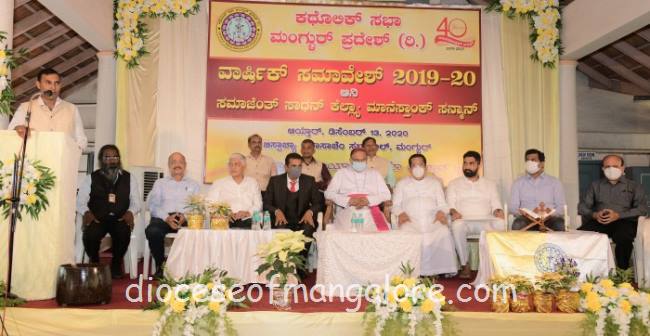 The conference was inaugurated by the Bishop of Mangalore diocese Most Rev Dr Peter Paul Saldanha and chaired by Paul Rolphy D’Costa, president of Catholic Sabha Mangalore Pradesh.

Speaking after receiving felicitation, Walter Nandalike said, “When we work towards the society, we can’t restrict ourselves on a particular community or religion. It is our responsibility to respect and reach everyone without any discrimination of caste, creed and religion.”

“We can’t judge a community by its few members or their fanatic thinking and hatred. When we fail to mingle and cope up with the people who hail from different communities, religions or their thoughts, then we also turn as fanatics,” Walter said.

“When a person points out a community, for differences, automatically he will also turn as communal. When the ‘term’ society comes without our major fellow communities like Hindu and Muslim brothers we Catholics can’t do anything. So, it is the right way to live in society being social and brotherhood”, he stressed.

“Bishop of Mangalore diocese is already known for his ‘Bandhutva’ message. In the past two years, he fully emphasized dialogue between inter-faith and communal harmony oriented programmes. The members of Catholic community should carry forward Bishop’s mission and Catholic Sabha should lead them ahead”, concluded Walter.