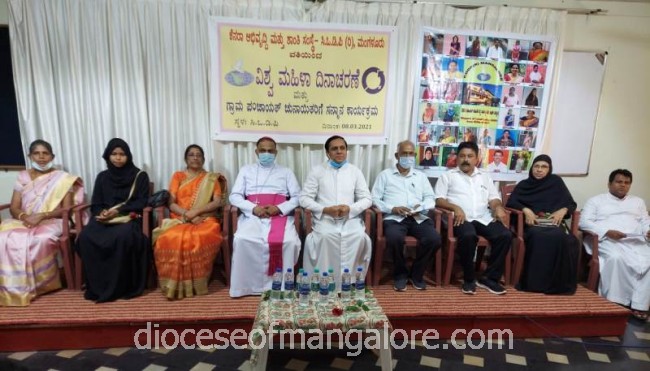 Mar 8 : On the occasion of International Women’s Day a program was organized by CODP on 08th March 2021 to felicitate the newly elected Grama Panchayath members from CODP promoted SHGs (Self Help Groups).

Rev. Fr Oswald Monteiro welcomed the gathering and expressed his happiness to 29 members of CODPs SHGs who won the Grama Panchayath elections as CODP focuses on women empowerment and also promotes leadership qualities among SHG members. He further said CODP provided awareness and promotes natural resource management, Sparsha-Campaign against cancer, etc. He motivated the elected members to do social service without any discrimination and reach out to every individual.

Bishop Dr. Peter Paul Saldanha, President of CODP felicitated the GP members and delivered the presidential address. He wished all women on the occasion of International Women’s Day. He said that a woman who rocks the cradle, can also rule the world. Both men and women are equal and hence should not be differentiated. He advised the elected Grama Panchayath members to develop their areas and also help the people of the area to solve their problems.

Mr. Padmanabha Ullal being the resource person, explained about the Panchayat Raj System. People living in the villages face many problems viz, water shortage, no proper roads, not able to avail various government facilities etc. He said that if there was any leakage in the water pipe line, citizens should inform the concerned department or local area in charge so that it could be rectified immediately. He advised the elected members to form local area whatsapp groups so that people can inform about local area problems which can be addressed by the president, Panchayat member.

Mrs Linet Castelino, Chief Guest of the program, spoke about various laws and sections of the IPC relating to protection of women. She also informed women to be aware of ATM scams, chain robbers and thereby take necessary precautions. If any family is demanding dowry from the girl, they can approach the law and get justice as per the Dowry Prohibition Act. Moreover, she informed that counseling services are provided in the police stations and also the procedure to file the FIR.

Mrs Naseema, elected GP member of Talapady and member of CODPs Pragathi SHG shared her experience about her association with CODP since the last 20 years. She explained how her life changed after joining the CODPs SHG and because of the motivation of CODP and staff Mrs Vani she began social service. Thereafter she started providing counseling services to broken families and was able to solve around 60 cases.

On behalf of Sparsha-Campaign against Cancer, a charity drive was initiated to support poor cancer patients.