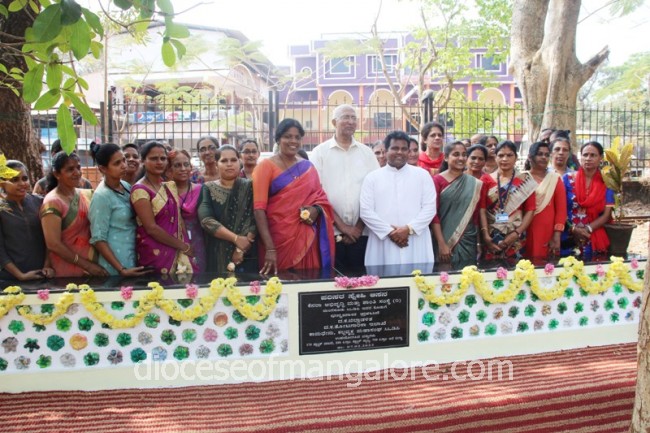 MANGALURU, Feb 17 : An eco-friendly seating bench under the initiative of Canara Organization for Development & Peace (CODP) and its units Kamadhenu/Kalpavraksha Mahasanghas, was inaugurated by the local corporator Mrs Shakeela Kava on Tuesday, February 15, 2022, at Kadri Park, Mangalore.

As many as 175 plastic bottles, 200 kg plastic and 750 kg of clay have been used to construct the eco-friendly bench at the park.

In his presidential address, Fr Vincent Dsouza, Director, CODP, spoke on the concept of Self-Help Groups (SHG). He said, “The approach to CODP’s developmental activities has changed from self help to empowerment and the SHGs are contributing to the process of development through such activities.” He hoped for more SHGs to be formed in Kadri Ward under Mrs Shakeela Kava, so that more women could be empowered and benefit from the various government schemes available for their development.

Addressing the gathering, Corporator Shakeela Kava said, “Plastic has been used in the right manner to construct an eco-friendly bench at Kadri Park. Plastic is a menace to the environment and it is a challenge to dispose it. CODP has come up with a brilliant idea to reuse the plastic in constructing benches. I hope that CODP will take up such projects in other places as well.”

Ms Lenet Gonsalves, CODP programme manager, explained in detail how this concept of eco-friendly seats came up. She said “In the year 2018, Ida Nitsche, a student from Germany was placed in CODP for a few months to do her internship. Upset at seeing waste being dumped in the surroundings, Ida inspired the eco brick project where plastic waste can be reused in an easy process.” Plastic bottles stuffed with plastic bags, crisp packets and other non-biodegradable waste were turned into an eco-brick. “Getting involved with the students of Mangaluru, Ida raised awareness on waste management among young minds and implemented a project on eco-bricks in three schools”, she added.

She also said, “With the help of eco-bricks we have constructed such eco-friendly benches in 15 places including at Ullal beach, CODP office, schools in Bajpe and other schools as well.”

Assistant Director of horticulture department Janaki V. appreciated the initiative of CODP in trying to educate the people through the concept of constructing eco-friendly seats in public places.