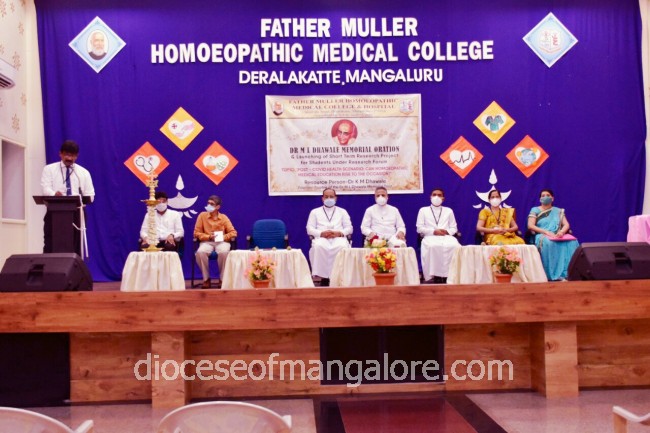 The programme began with a prayer song and the gathering was welcomed by the Principal, Dr E S J Prabhu Kiran. The dignitaries joined to light the lamp and formally inaugurated the programme. The Director, Rev. Fr Richard Aloysius Coelho garlanded the portrait of Late Dr M L Dhawale.

Dr Srinath Rao offered a tribute to the Homoeopathic legend Dr M L Dhawale. He called him a man with a mission who embraced the institution’s motto. He mentored this institution and was responsible for producing professional luminaries and inspired many. Action learning was his philosophy and he used to visit Father Muller Homoeopathic Medical College and Hospital for imparting knowledge through intellectual exercises on tri-coordinate care viz – knowledge care, patient care, learner care. He was a revolutionary personality who brought upon phenomenal results in treatment of leprosy.

Dr Anita Lobo, Professor, Department of Repertory and Coordinator of Research Forum introduced Short Term Research Project for Students under Research Forum. The research projects taken up by the students under this initiative will be exclusively funded by the Father Muller Homoeopathic Medical College.

The Director, Rev. Fr Richard Aloysius Coelho in his presidential address, recalled the journey FMHMC went through, from the time of its inception till today as being the magnum opus in the Homoeopathic educational field. He also remembered the great works of his predecessor, Late Rev. Fr Peter Noronha and the former Principals who were guided by Late Dr M L Dhawale laying the foundation for standardized Homoeopathic education.

Dr Shivaprasad K, Convener of the programme proposed the vote of thanks. The inauguration programme concluded with the institution anthem.

After the formal inauguration, Dr Shivaprasad K, Moderator for the oration introduced the speaker Dr K M Dhawale and the topic: “Post Covid scenario: Can Homeopathic medical education rise to the occasion?” In his oration, Dr K M Dhawale threw light on the current state of Homoeopathic medical education and the way forward. He stressed on the need to look ahead on the means to adopt a model of competency based medical education that will uphold the functioning of the institutions in fulfilling the health care needs of the country. The oration concluded with the Q & A session.