Mangaluru : Festal Celebration of the Patron Saints of FMCI 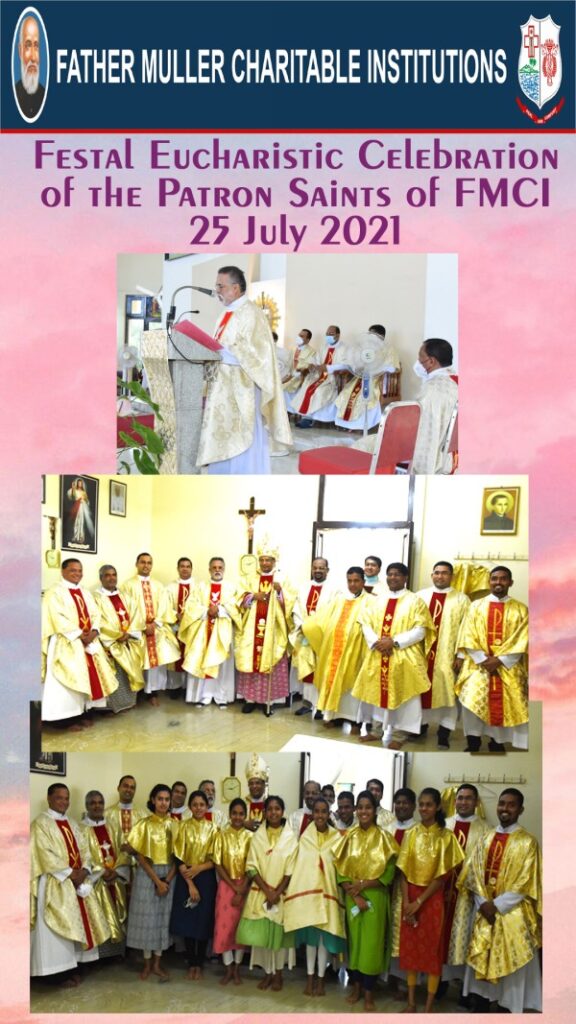 July 26 : The Father Muller Charitable Institutions celebrated the feast of patrons Saints Joachim and Anne on 25 July 2021 with a Eucharistic celebration presided over by Dr Peter Paul Saldanha, Bishop of Mangalore and President of FMCI.

The homily preached by His Lordship focused on the importance of grandparents in proclamation of God’s kingdom to their next of generations. Sighting that in one of his reflections, Pope Francis said His grandmother, whose early Christian influence in his life, laid a path to his priesthood. Parents of Mother Mary, though not mentioned in the Gospels, have a mention in the non canonical book of St James. Their faith in God and perseverance begot them Mary and later on their prayerful ways influenced Jesus. With the declaration by Pope Francis that the 4th Sunday in the month of July to be celebrated as the day of the ‘Grandparents and Elderly’ the emphasis of the wisdom and guidance of yester generations on the young was to be recognized and appreciated. Older generations impart their learning in young ones, especially their grandchildren. Society without the elderly is like a rudderless ship. Respect and care of the elderly is to be inculcated in the young and thus generations ahead will learn to be peaceful. Even a patient visiting a hospital asks for the senior most staff, not that he distrust the young doctor but it instils confidence. He called on the elderly to stay healthy and make the best out of the time to educate and teach their young ones the way to Christ.

Rev Fr Richard Aloysius Coelho, Director during the announcement, showered his praises on the Mullerian Family who have worked tirelessly through the past year. He thanked his Priestly brothers who have been his constant strength in carrying out the work of the Institution.

The choir was trained by Fr Ajith Menezes which comprised students of the MBBS interns and final years. The Keyboard was played by Post Graduate student of ENT Dr Tiya.

The Eucharistic celebration was attended by the members of the Governing Board and the Advisory Board. Festal cake was distributed to attendees at the end of the mass.

Blessing and Inaugural of Karunalaya Convent in FMCI Campus

The Convent of the Sisters of ‘Helpers of Mount Rosary’, Karunalaya was blest and inaugurated by His Lordship on 25 July 2021 in the 3rd floor of the Facility Block in the Father Muller Charitable Institutions Kankanady Campus.

The sisters have been part of the FMCI at Kankanady since 2006 rendering their services in the Laundry Department, Cafeteria, and Rehabilitation Centre. 5 nuns currently reside there providing even nursing and laboratory technical assistance too.

Director of FMCI, Rev. Fr Richard Aloysius Coelho welcomed the gathering and accentuated the need for a spacious and well ventilated convent. The old convent was situated in the nursing services department and thus needed its own space. The ribbon cutting was done by Sr Precilla D’mello, Mother General of the congregation and the convent was blest by His Lordship Dr Peter Paul Saldanha, Bishop of Mangalore and President FMCI.

The current Superior of the Convent is Sr Helen Lewis, who helped in arranging and organising the event. Members of the Management and Advisory board were present during the inaugural.