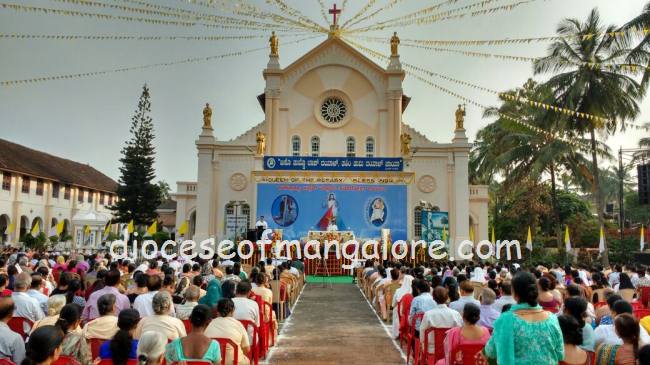 The Bishop of Mangaluru Dr Aloysius Paul D’Souza lit the lamp along with the Parish Priest of Rosario Church Fr J B Crasta and Fr Pius James D’Souza, Superior of St Joseph’s Monastery,

Last year on December 13,  Dr Aloysius Paul D’Souza had inaugurated the Jubilee Year of Mercy by opening the Holy Door of the Rosario Cathedral. Later, all the faithful who had gathered at the church premises entered through the Holy Door for the prayer service.

On November 20, at the Rosario Cathedral, addressing the faithful Prof Fr Clifford Fernandes from St Joseph’s Seminary said, “Mercy is not a caption but is an action. Whatever we sow, we reap. God created the Universe but humans created only barriers. Life is only for four days and after we die, we will be buried or cremated, if you do good, people will remember you after your death”.

Fr Clifford further said, “If you have mercy, concern and love towards others that are the true beauty of a person. God is merciful and forgiving. The motto of the year of Mercy is “Merciful like the Father”. Day-after-day touched by God’s compassion, we also can become compassionate towards others. The motto serves as an invitation to follow the merciful example of the Father who asks us not to judge or condemn but forgive and to give love and forgiveness without measures”.

Report and Pics by Violet Pereira