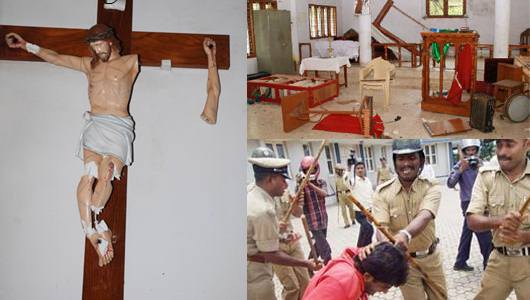 Bengaluru, Aug 25: After almost seven years of church attacks in Mangaluru, the National Human Rights Commission (NHRC) has found that police had used excessive force on those who protested against the attacks and has directed the state government to give compensation to 12 victims of police excesses.

Accordingly, the state government in an order dated August 20 has instructed the deputy commissioner to pay compensation of Rs 15,000 to each of the 12 victims who had sustained injuries while protesting against the attacks in 2008. The victims included nuns and other women too.

Welcoming the decision, Archbishop of Bengaluru Dr Bernard Moras in a press release said, “I am relieved and thankful to hear that after almost seven years, the NHRC in its order dated August 20, 2015, has meted out justice to 12 victims of police excesses during the spate of attacks on churches in the Dakshina Kannada district in 2008.

“The NHRC’s statement ‘It is not in dispute that the religious places of Christians were attacked by fundamentalists. It was natural for the followers of Christianity to feel agitated. It is their fundamental right to protest against desecration of their religious places. Even if it became necessary for the police to use the force to disperse the agitating mob, it should have used such force with utmost restraint. The NHRC enquiry team establishes that the police used excessive force’ gives us a sigh of relief,” the Archbishop said.

“With the NHRC ordering a compensation of Rs 15,000 (each) for the 12 victims, we are further convinced that the jury acknowledges that we have suffered violence and injustice. Though the hurt caused to the peaceful Christian community cannot be quantified I am happy that the NHRC pronounced that our Constitutional right to worship was threatened,” he added.

He also urged for stringent action against the guilty policemen. “While I recall having thanked the state government at a state media conference on October 24, 2014 for rejecting the ‘one-sided and biased’ report of the B K Somashekara judicial inquiry commission, I still feel that the police personnel who indulged in ‘excesses’ as found by the NHRC, must be strictly penalized not just in the interest of the Christian community, but to send a signal to the police force to be sensitive to the sentiments of people of all religions.

“Being a multi-cultural and multi-religious country, I hope and pray that peace and harmony will prevail over religious fundamentalism. The police have an important role to play. Those instigating or subtly inducing violence and hatred between religious groups need to be dealt with heavily,” Dr Moras said.

“I reiterate my appeal to the honorable jury of the NHRC to bring the culpable police personnel and those indirectly involved in the ‘excesses’ in Dakshina Kannada to further scrutiny and penalty. Stringent action against these police personnel will prevent ensure greater caution and provide for an ambience of peace,” he stressed.