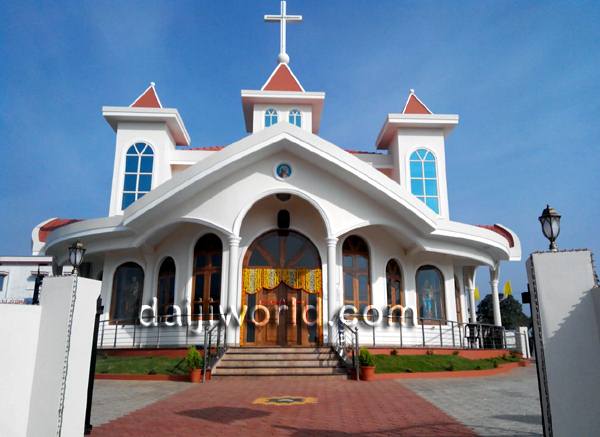 Immortalizing the historic visit of the then Pope St John Paul II to Bajpe back in 1986, the shrine built in his memory was inaugurated and blessed by Apolistic Nuncio to India  and Nepal Dr Salvatore Pennacchio in a splending ceremony at Bajpe here on Thursday November 27.

Afetr the formal inauguration the solemn eucharistic celebration was held at the shrine presided over by the Apostolic Nuncio and the bishops  Most Rev Aloysius Paul D’Souza Bishop of Mangaloru,  Most Rev Gerald Isaac Lobo  Bishop of Udupi, Most Rev Francis Serrao Bishop of Shivamogga , Most Rev Lawrence Mukkuzhy Bishop of Belthangady,  Most Rev Geevarghese Mar Divannasios  Bishop of Puttur , Msgr Denis Moras Prabhu  Vicar General of Mangalore diocese, Msgr Jayanathan Vicar General of the Arch diocese of Bangalore and priests from Mangalore and udupi dioceses

During the mass the main celebrant cleansed the church,blessed the satatue of St John Paul II by springling holy water.He aslo consecrated the eucharistic table and the tabernacle which is the source and summit of all the devotees who come to the shrine.

In his homily, Dr Francis Serrao spoke about the life and times of St John Paul II and said that he had suffered much during the German Nazi regime and how he came to be known as the ‘Uncle of Poland’. “He was the first person from outside Italy to become the Pope. He  forgave  his attacker Mehmet Ali Agca by visiting to the prison and embracing him. We have to denounce the culture of war and embrace the culture of life,” Fr Serrao said, adding that St John Paul II had great devotion towards Mother Mary and always chanted the rosary  until his last breath.
At the end of the mass Apostolic nuncio presented  through the bishop of Mangaloru the greatest gift to the shrine the relic of St.John paul II brought from Rome which contains the blood drop of the saint. After  the offcial declaration of the veneration of the relic the main celebrant and the bishops gave the final blessing of the relic.

Addressing the gathering, Dr Salvatore Pennacchio said, “I feel very happy to be here to inaugurate my spiritual father’s shrine. Everywhere St John Paul II visited, he spread the message of peace. I bring peace and greetings from Pope Francis to the people. This is the first shrine in India dedicated to Pope John Paul II. I congratulate all the people who worked and contributed in building this magnificent shrine.”

Dr Gerald Isaac Lobo said, “John Paul II was canonized saint within 9 years of his death. As Pope, he made a number of journeys to various parts of the world. He was a messenger of peace, a guide to the youth of the world. I was first made bishop by him, I still have the cross and Rosary which he gave. I have  great devotion towards him. I considered him a saint even when he was alive. Whenever the media asked me about my meeting with him, I would say I had the chance to meet a living saint. This place was made holy after his visit.”

Oscar Fernandes said, “Today is a great day. I am happy that I am from this constituency, and it feels good to have this Shrine in my constituency. I had opportunities to meet John Paul II whenever he came to India. I was also the representative from India to attend the last rites. I had the chance to see the bullet that struck St John Paul II.Moreover when he visited this very place I lost my three year old child in the croud but I found the child with Pope. I thank each and everyone responsible for the building of this Shrine.”

MLC Ivan D’Souza recalled the visit of St John Paul II and said, “When St John Paul II came to Mangaluru, I was involved in the preparations and tied the buntings and flags. I got into the crowd and was blessed by him. I decided to be his devotee now and will remain so in future also. This place has to grow, and that is possible only through people’s support. Let us work together to make this Shrine shine.”

MLA Mohiuddin Bava in his address expressed happiness at being part of the event and stressed on living together with harmony and peace.Ministers Abhaychandra Jain and Ramanath Rai also graced the event for a brief while.

On this occassion the  first ever Catholic Worship software developed  by four young Catholic priests and Mr M. P. Noronha Advocate who is the Present Secretary of Pastoral Council of Mangalore Diocese was launched by the Apostolic Nuncio.
Simon, who had received St John Paul II from airport and taken him around during this visit to Mangaluru, and Sushma Malli, wife of the late Manmohan Malli, who donated the 7 cents of land to build the Shrine, were honoured at the occasion
Fr Leo Lobo the Parish priest, Fr Praveen D’Souza Asst Parish priest, donors, engineers and others involved in construction of the Shrine, Dr Salvatore Pennacchio and Dr Aloysius Paul D’Souza were felicitated. Artist Calvin presented a painting of St.John Paul II to Dr Salvatore Penncchio.

The Noveena to St.John Paul II will be held on every Tuesday at 9.30 am in the shrine at Bajpe.