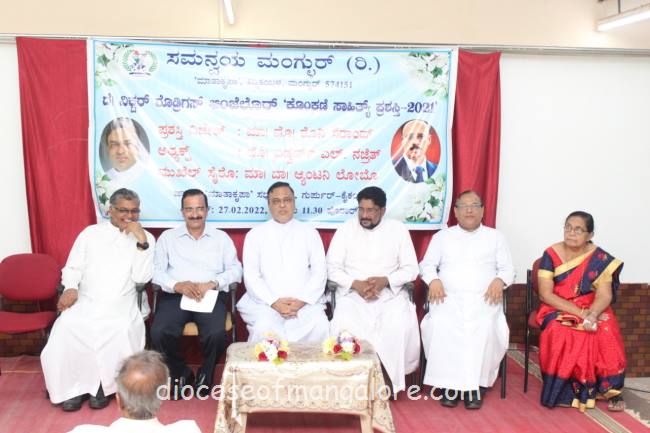 MANGALURU, FEB 27: ‘The contribution of the Catholic Church in the development of Konkani language in this region is commendable’ opined Dr. Edward Nazareth, renowned Konkani literate and Professor of Orthopaedics at Srinivas Institute of Medical Sciences, Mangalore while felicitating Rev. Dr. Ronald Serrao, Rector of St. Joseph Seminary Mangalore who was bestowed upon Victor Rodrigues Konkani literary award 2021.

The award ceremony was organized at ‘Matha-Kripa’ hall of Samanvaya at Grurpur-Kaikmaba on Sunday, 27th February 2022. Rev. Fr Antony Lobo, parish priest of Gurupur-Kaikamba parish was the chief guest.

Dr Edward Nazareth said, “‘By adopting Konkani as the language of prayers and liturgy, several books are being published in Konkani. There are two translations of the entire Bible in the Mangalorean Konkani dialect. There are several hymns, prayers in Konkani published in the form of books. This has helped Konkani to flourish in our families. Poets and writers like Rev. Dr Ronald Serrao has contributed immensely to the Konkani religious literature, which has helped Konkani to grow. Raknno which was started by the Diocese of Mangalore in 1938 has contributed so much to Konkani literature by nurturing writers like me. The literature published by Raknno both in the periodicals and in the form of books is rich. Even today, Konkani literature is thriving because of periodicals published by the religious organization, both diocesean and religious. We have to be always grateful to our religious heads like the late Bishop Basil D’Souza and many priests like the late Msgr. Sylvester Menezes, late Msgr. Alexander F. D’Souza and stalwarts like Rev. Fr. Mark Walder who helped the Konkani language to grow. By honouring Rev. Dr. Ronald Serrao, we are honouring the entire community of religious people who are contributing towards the growth of Konkani language’.

Rev. Fr. Antony Lobo felicitated Rev. Dr. Ronald Serrao and recalled his contribution as a writer of thousands of articles on religious matters and liturgy; a writer of several religious plays both on the stage and now in the television shows, poet and musician of religious hymns in Konkani. He hoped other religious writers also would be recognized in future.

In his reply to the felicitation, Rev. Dr. Ronald Serrao thanked Samanvaya and the family of late Victor Rodrigues for choosing him for the award. He expressed his displeasure on the invasion of English in our day today conversations and called upon the people to support Konkani by speaking in Konkani at home and with other Konkani people.
Mrs. Celine Rodrigues and the other family members of late Victor Rodrigues felicitated Rev. Dr. Ronald Serrao and Rev. Dr. Pius Fidelis Pinto for helping them to organize the award ceremonies over the years.