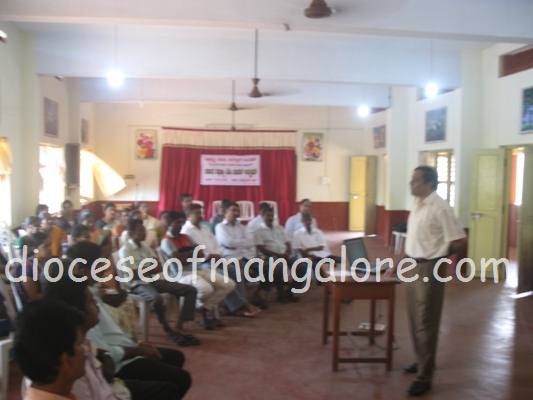 A training programme on ‘Government scheme for Minorities’ was organized by the CODP ® in collaboration with the Development Committee of Mangalore Diocese and Kasargod Deanery on March 15th 2015 at St. Monica School Hall, Kumbla.

The Vicar General of Mangalore Diocese Msgr. Denis M Prabhu inaugurated the programme. In his introductory speech he gave brief information of different pastoral committees and motivated the people to work for their own development.

The Secretary of Development Committee and CODP Rev. Fr. Oswald Monteiro, in his session explained about “What is Development and how people of any community can improve their economic situation by following Asset Based Community Development Approach”. He further said that, real development is visible only when people fully participate in any activity and make maximum use of their own resources and opportunities available.

Thereafter, resource person  Mr. Johny Crasta, Kasargod Deanery CAP Coordinator  explained about various government schemes for minorities, and how to apply for these scheme which are introduced for minorities by the Government of Kerala state. Further, he informed that in 2012 the Kerala State Government has established the commission for Minorities, especially to give the low interest loan for their higher education. He also highlighted the different types of low interest loans available for the benefit of minorities.