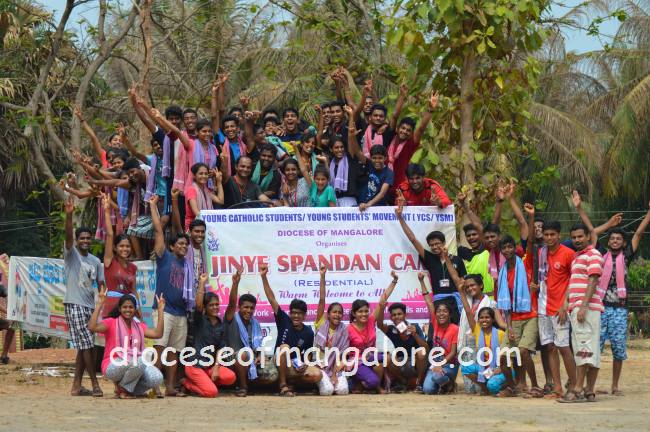 May 15, 2017: The YCS Mangalore Diocese under the leadership of Rev Fr Rupesh Madtha (the Diocesan YCS/YSM Director) and the Central Council organized diocesan level exposure camp “JINYE SPANDAN – 2017” for the representatives of YCS units from all over the diocese. The camp was held from Sunday 7th May to Thursday 11th May, 2017 at Permannur Church Campus.

After the prayer, Fr Rupesh gave an introductory speech, Miss Lavita D’Souza welcomed the guests, Miss Merita Albuquerque the Diocesan Secretary raised vote of thanks and Miss Reema Veigas compered the program. The Bishop inaugurated the camp by releasing the Camp Promo which was followed by the students singing the Theme Song of the Camp and YCS Claps. The Bishop gave a call to have focus in the life of youngsters. After the message from Rev J B Saldanha, the guests and sponsors were given mementos.

The camp activities were well planned and organized. The students did manual labour in the morning hours where they helped not only in cleaning the church surroundings but also helping a poor family to build their house. In the afternoons talks on career, facing the job interviews, values in a catholic youth etc were held. In the evenings Taize prayer, cultural competitions, quiz, memory test, games, sing- songs, camp fire etc were organised.

A few special innovations were planned and organised. First of all the students in groups visited public places like Police Station, Municipality Office, Mosque, Temples, Ashram and Houses to interact and discuss. The students were given good hospitality and a lot of time to interact. Later reaching back to the venue they applied the experience to the SEE-JUDGE-ACT-EVALUATE methodology of YCS.

Secondly, a panel discussion with a politician, a businessman and a government employee gave inspiration to the students to choose their future. Thirdly, a talk on basic life skills such as cooking, hygiene, dressing, basic house works like washing, sweeping etc was held. Finally, Priests and Nuns shared about their life and scope was given to ask questions and clarification about Religious Vocation.

The concluding program was presided over by Rev Fr Valerian Fernandes (Editor – ‘Raknno’ Weekly). After the Holy Mass the students shared their rich experience and they also recited the commitment prayer. The YCS FAMILY LUCKY COUPENS draw was held and the winners are as follows – Navin, Ujire as the “Lucky Benefactor 2017”; Anup, Modankap as the “Lucky Donor 2017” and Floyd Santhumayor Belthangady as the “Lucky Supporter 2017”. These will be honored by the Bishop on the YCS Annual General Body Meeting on July 2nd, 2017 at Bajjody.

Seventy selected students from the diocese participated in the camp and there were six Animators to help the students. The Diocesan Council executed the whole event. The Catholic, Hindu and Muslim friends joined hands in one or the other way for the success of the camp.